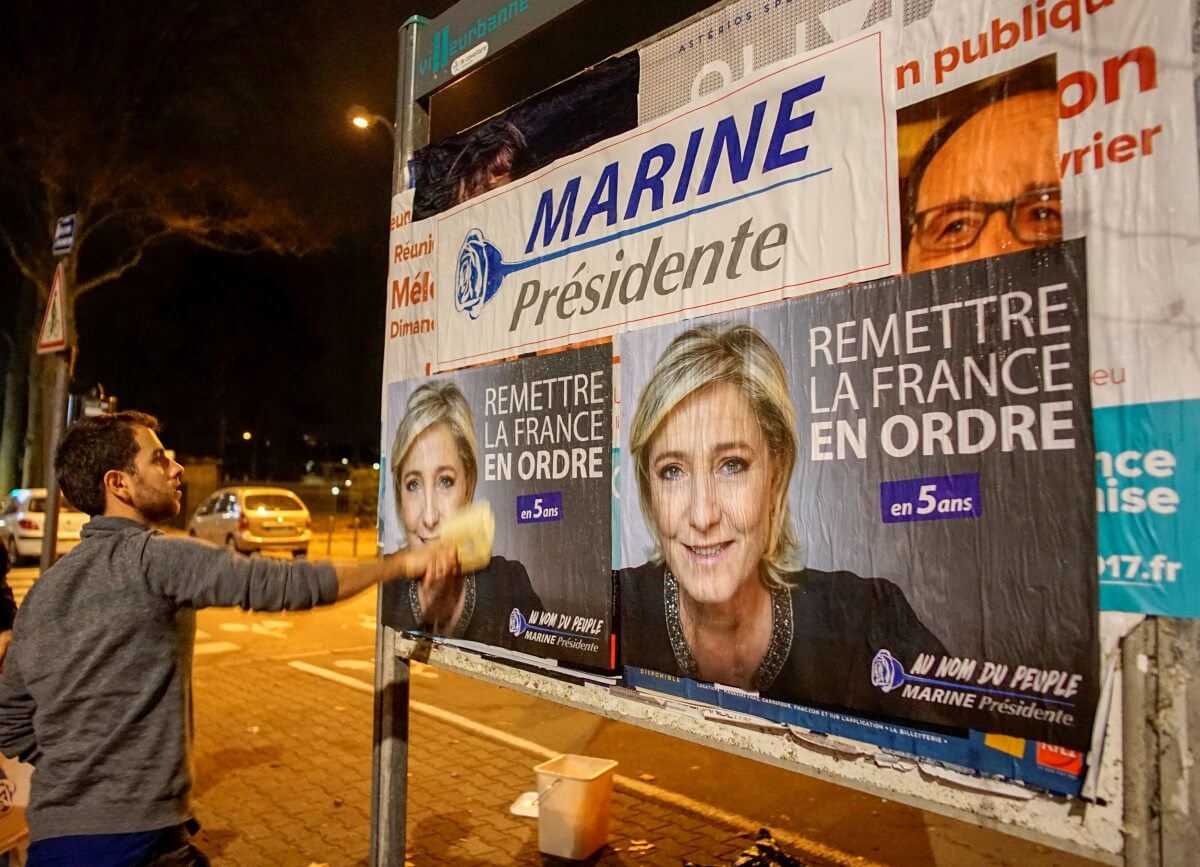 Just a few years ago, it was hard to find students willing to admit to being National Front cardholders. When a journalist went looking for members of the FNJ youth movement during the last presidential election campaign, most would agree to speak only if their names were withheld.

Five years on, young activists supporting Marine Le Pen’s election bid say they no longer have anything to hide, as she cruises to an expected first place showing in the first round next month.

“It just provides for lively discussions,” said 21-year-old economics student Corentin Corcelette, who, far from keeping his views secret, says he talks about the rollercoaster presidential election with friends of all political persuasions on campus.

Sitting in the same car as they drove around Lyon to put up “Marine President” posters, 20-year old biology student Remi Berthoux was also happy to give a reporter his name. He joined the FN two years ago, he said proudly, “to defend France’s values”.

Once consigned mainly to the shadows, young National Front supporters have come out into the open, as voters their age have lined up behind Le Pen. Daily polls by firm Ifop consistently show her earning nearly a third of the youth vote in the first round, easily beating any of her opponents, although she is still forecast to lose in a second-round run-off in May.

She fares better among voters under 25 than she does among the population at large, often by a margin as high as 7 percentage points. That is a big reversal from her first bid for the presidency five years ago, when her 15 percent share of the youth vote was around 3 points below her overall tally.

Winning over young voters has been an achievement for Le Pen’s campaign to detoxify the National Front brand.

In the past, when the Front’s FNJ youth wing put up posters, “they would do so in the middle of the night,” said Sylvain Crepon, a researcher at the University of Tours who studies the French far right.

“They carried baseball bats to protect themselves and would often be with skinheads,” he said. “Now they can do it in broad daylight, which shows people have grown more accustomed to the FN. It’s become more acceptable.”

There was not a baseball bat or skinhead in sight on the early evening last month when a group of nine clean-cut young men including Corcelette and Berthoux put up Le Pen posters in the streets of Lyon and on its university campus.

“We absolutely don’t see ourselves as far right, but as patriots who are disappointed with other parties,” said David Sedoff, a 26-year old warehouse worker.

Demographics are a major difference between the far right surge on the European continent and last year’s rise of populists in Britain and the United States.

U.S. President Donald Trump and the campaign to withdraw Britain from the EU both lost badly among young voters, on their way to victories won with overwhelming support from pensioners.

For Le Pen, the demographics are almost exactly reversed. She performs well among all categories of younger voters: those under 25, under 35 and under 45. Her worst results are among pensioners: the over 65’s are only age group where she consistently trails her rivals in polling for the first round.

Unlike their Anglo-Saxon cousins, continental populist politicians like Le Pen, the Netherlands’ Geert Wilders and Italy’s Beppe Grillo have turned young voters into their key constituencies. They feed on the resentment of a generation with little seeming hope of matching its parents’ standard of living.

In France, nearly a quarter of workers under 25 are unemployed, compared to a national jobless rate of about 10 percent, according to last year’s official statistics.

And those young people lucky enough to find jobs often work under far less generous conditions than previous generations. More than half of workers 24 and under have only temporary contracts or agency positions which come with few guarantees or rights, compared to 85 percent of French workers who enjoy full time contracts with strong worker protections.

While Le Pen’s theme of dramatic change appeals to many young voters, their grandparents benefit from the generous pensions of the status quo and worry that her plan to abandon the EU and its euro common currency would hurt their savings.

Young voters are also less likely to associate the National Front with its founder, Marine Le Pen’s father Jean-Marie Le Pen, who topped out at 17.8 percent of the vote in his repeated quests for the presidency and never crossed into the mainstream.

He was convicted repeatedly for inciting racial hatred before his daughter banned him from the party.

Since then, Marine Le Pen has carefully reconstructed the party’s image and distanced herself from her father. She is referred to as “Marine” — without her surname — on her official campaign website and posters, and eschews the FN’s torch symbol for a new logo of a blue rose.

She tends to emphasise economic issues, portraying the FN as guardians of working class voters left behind in the decade since the global financial crisis, and blaming the EU in general and the euro in particular for making France less competitive.

But hostility towards immigration and suspicion of Islam are still central tenets for the party. In a country that has Europe’s biggest Muslim minority and has been hit by a succession of Islamist militant attacks in the past two years, the FN’s xenophobia is no longer the barrier to attracting young voters that it once was.

“Europe, immigration, I’m against all that,” said Eric Barbosa, a 20 year-old baker, at a meeting of the FNJ’s Paris branch.

It offers more opportunities for ambitious youth to make their mark than the main post-war parties of the centre-left and centre-right, where vacancies for posts are blocked by older incumbents and veterans.

FN candidates in local and regional elections are routinely the youngest in the field, often in their 20s or early 30s.

That means a quick path into frontline politics for people like 23-year-old Victor Birra, a business student who joined the FNJ youth movement five years ago and is now its head in the Lyon region.

He describes the youth movement as the “academy for FN cadres”, comparing it to the grand public institutes that traditionally produce many of France’s politicians.

But future ambitions depend first on getting out the vote for Le Pen, he said. “We’re fighting to win the presidentials.”