‘No P*kis’ scratched into car bonnet in Peterborough 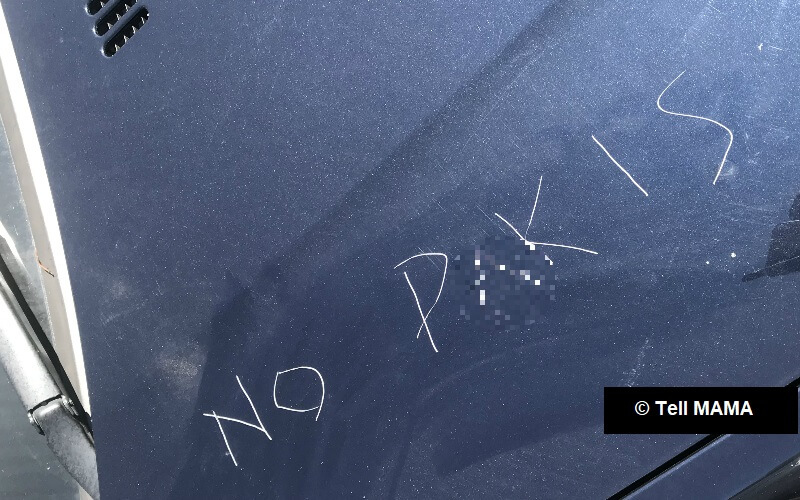 A Muslim man awoke on Tuesday morning to discover that someone in their neighbourhood has scratched the racist phrase “No P*kis” into their car bonnet.

Speaking to Tell MAMA, he condemned the “unnecessary” and “cowardly” act.

Cambridgeshire Police investigated the racist incident, reported on May 14, but closed the case, citing “no lines of enquiry”.

He added that this was the first time he had experienced such racism in his area.

The racialisation of Muslims, has, according to some shifted from traditional understandings of race and racism, and into a form of understanding where South Asian identity has foregrounded conceptions of “The Muslim” identity, despite the racial diversity of Muslim communities in England and Wales.

Tell MAMA continues to argue that any understanding of Islamophobia and anti-Muslim hatred must be grounded in a deeper understanding of intersectionality, racialisation, and cultural racism, given how Muslims, irrespective of ethnicity, are subjected to a variety of racial slurs.

An explanation for this concerns how Muslims are ‘othered’ by sections of society, deemed outsiders, who are deemed to be “incompatible” with the UK on grounds of identity, culture, and security.

One in ten cases reported to Tell MAMA in the 2017 reporting cycle concerned vandalism.