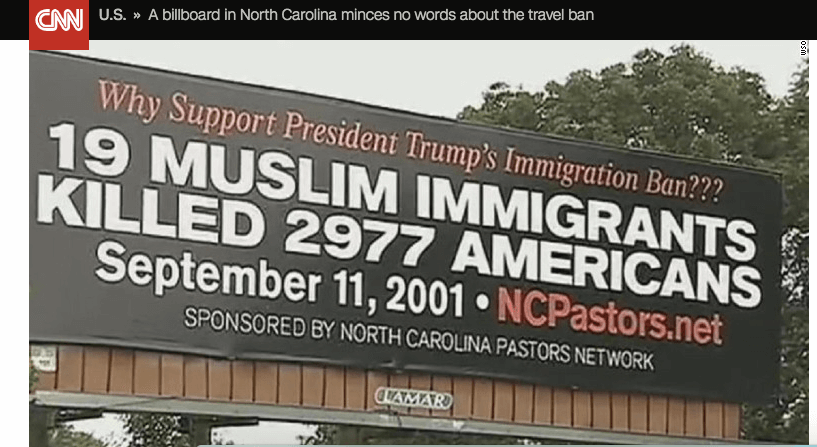 This evening we received information from a U.S. resident about billboards in North Carolina that seems to have been sponsored by a group calling itself the North Carolina Pastors’ Network. The billboards have been picked up by mainstream press sources in the U.S. such as CNN. One of the billboards states that “19 Muslim Immigrants killed 2977 Americans”. References are clearly made to September 11th 2001 in what seems to be a campaign running up to the 16th anniversary of the terrorist attack on the U.S.

The reality is that 9/11 was an attack by Al-Qaeda on all Americans, whether they were Christian, Muslim, Sikh or of no faith. Islamist extremists, whether in Afghanistan, Pakistan or within Europe, do not care who they kill or maim and their aim is to attack the very fabric of societies and to create division and death, whist setting communities against each other. Each and every person who lost their life in the 9/11 attack should be remembered for who they were and for the joy and value they brought to their loved ones and to colleagues and communities. Additionally, Muslims were also killed in the 9/11 terrorist attacks who were going about their daily lives as settled U.S citizens.

We also wanted to highlight the wonderful e-mail that we received from the U.S. resident showing that many within the country abhor those who seek to cause division. This is a summary of their text:

“It’s a very misleading billboard in North Carolina posted by the North Carolina Pastors network and it highlights 19 Muslim immigrants who killed “2977 Americans on 9/11″ in order to support Trumps Muslim ban. It is clearly against Muslims. I have a son traveling cross country right now with his Muslim friend and they are heading to North Carolina. It makes me sick to my stomach a young Muslim American man has to see this. It makes me sick knowing his beautiful mom fears for his life in America. There needs to be a way this billboard comes down.”