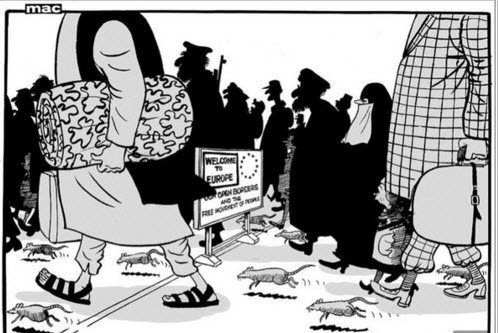 RE: Editorial Cartoon in the Daily Mail on the 17th of November 2015

We wanted to get in touch with you regarding this cartoon which was published on the 17th of November. We would like to start off by saying that unlike some, we believe that the Daily Mail has published some excellent investigative pieces in the last 24 months and produces scoops at points that are unique and which have a public interest. We also have to acknowledge that there are fundamental differences around our views on refugees, minority communities and on human rights. On these, we will continue to differ since we believe in the right for people to seek sanctuary when they are persecuted and in the protection of communities who are threatened or abused just because of a part of their multiple identities. We also believe that human rights are fundamental to a healthy functioning democracy.

However, we would like to turn attention to the cartoon printed in the Daily Mail on the 17th of November 2015. The cartoon was a depressing attempt to couch stereotypes in the guise of artistic freedom for a national newspaper. The suggestion given was that Muslims are symbolic of men with beards and with their wives walking behind them and where refugees cannot be fully trusted since their migration is allowing in terrorists – note the man with the weapon.

Whilst the Paris murders do indicate that a handful of extremists may have slipped into Europe with refugees, we need to re-iterate that refugees should not be seen as part of the problem and their plight is real as they flee from the horrors of Assad and the so-called Islamic State. Yet, this cartoon is not meant to acknowledge such issues and plays to the most basal stereotypes about Muslims and raises question marks on fleeing families who have suffered years of war, persecution and killings.

Finally, we are very concerned that the cartoon places fleeing rats with the individuals in the cartoon. Is the Mail suggesting that the refugees or Muslims are rats? Why was other wildlife not used and why rats?

Such imagery should never be repeated again. In 2015, the production of such imagery is simply an insult to us all.