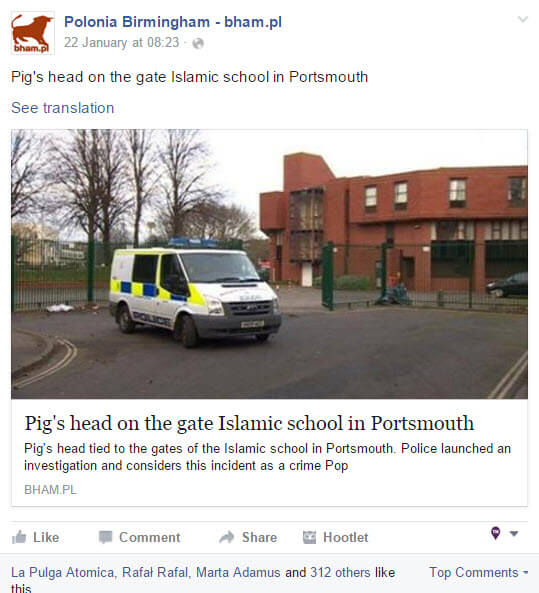 We have been notified of a Facebook page called ‘Poland – Birmingham‘ which highlights an area of growing concern for us.

Over the last 4 years, we have not highlighted this issue since we have believed that a migrant community that has also suffered a great deal of prejudice and bigotry deserves support and no further pressures or stigmatising. Indeed, we are aware of many organisations that have been tackling racism and prejudice, who have actively advocated against anti-Polish rhetoric and the xenophobic bigotry that this community suffered after the accession of Poland into the European Union. Many of these organisations were led by members of Black and Minority Ethnic communities who felt that this community was being unfairly treated.

However, we have to say that we are concerned by the anti-Muslim cases that we have received that have involved perpetrators who have migrated from Poland and from other Eastern European Accession States. Much of the anti-Muslim prejudice has been triggered because of alcohol, though the responses on the ‘Poland – Birmingham’ page are appalling. They show a need for some Poles to tone down their bigotry and their rhetoric and to realise that inclusion, integration and cohesion are fundamental planks of our country. This means that racism and prejudice should have no quarter in our country.

What is also of real concern is that these comments come from members of a community that suffered press headlines that were xenophobic and prejudiced when the accession of Poland took place and when a large number of Poles migrated to the United Kingdom for the purposes of work.

We are thereore highlighting this issue now so that it sparks debate and we hope, introspection by some members of the settled Polish community in our country. Anti-Muslim bigotry is just as bad as the anti-Polish rhetoric that many suffered. We need to collectively tackle prejudice, racism and bigotry, instead of turning against one another as communities.