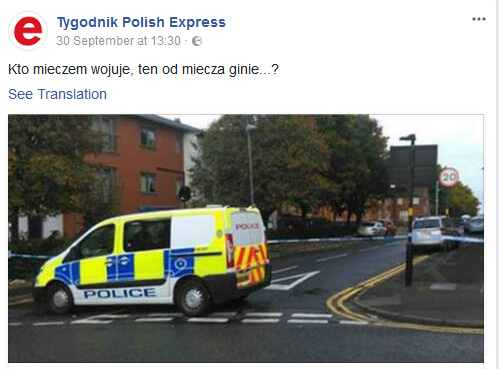 A Polish newspaper has removed an offensive headline concerning the attempted murder of a 15-year-old boy who was stabbed multiple times outside of a mosque in the Small Heath area of Birmingham.

On September 30, the Polish Express headlined the story, Kto mieczem wojuje, ten od miecza ginie…? In English, it translates as, ‘live by the sword, die by the sword,’ according to the Notes from Poland page on Facebook.

Readers of the newspaper and members of the public condemned the headline, both in Polish and in English, with one reader accusing the newspaper of using ‘cheap’ tabloid tricks, as another remarked about their ‘unprofessional’ conduct.

Twitter user @McChris85 also challenged the newspaper, replying to their now-deleted tweet, ‘Are you seriously comfortable writing this about an innocent child?’ at 5:28 pm on September 30.

Tell MAMA raised the issue with the Polish Express after members of the public had raised their concerns with our staff.

A spokesperson for the newspaper confirmed that the headline was removed and replaced with a more ‘appropriate’ headline.

A screenshot captures how the Polish Express amended its headline following complaints.

The edit history for the initial Facebook post reveals that the Polish Express had altered the Facebook headline in the afternoon of October 2. Following this amendment, the newspaper thanks its readers to the ‘inappropriate,’ agreeing that in the context of the story, the choice of text was offensive.