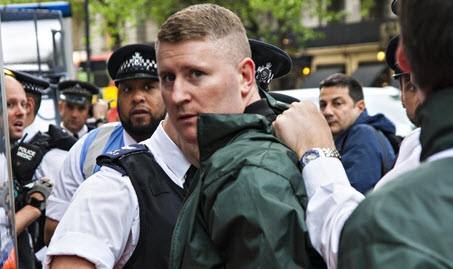 We have highlighted the following case to show the actions of far right groups like Britain First who intimidate people and who, thankfully, have been successfully prosecuted by the Crown Prosecution Service. This text highlights the criminal conviction of the Group’s leader, Paul Golding.

On the evening of 3 April 2014 Paul Golding, the leader of an organisation called Britain First, visited Chafont Hundred, a small town in Essex, along with a group of male supporters. The group’s primary intention was to confront a man called Sajeel Shahid who, according to an article in the Daily Mail, had been a member of a proscribed terrorist organisation and had been involved in training terrorists in Pakistan. In fact, the house that the group intended to visit actually belonged to Mr Shahid’s brother, and at the time of their visit only his wife, Munnazza Munawar, and their three children were at home.

On arrival in the area the group began posting leaflets entitled ‘no hate preachers in Hepburn close’ through a number of doors in the vicinity before approaching Mrs Munawar’s front door. PauL Golding knocked and, although Mrs Munawar did not open the door due to her understandable concern, he asked her to pass a message on to Sajeel Shahid that he should get out of the neighbourhood. He ended by stating that he would return and posted one of the offending leaflets under her door before departing. Mrs Munawar was left in a state of fear for herself and her children.

One member of Paul Golding’s group filmed the whole visit including a number of speeches that he made to camera. The video recording of this incident was subsequently posted on the website of Britain First. In this footage Paul Golding could be seen to be wearing a green bomber type jacket which had a visible emblem on the right hand breast. The others in his group all wore similar jackets which were available to buy on the Britain First website.

Paul Golding was prosecuted for an offence of harassing a person at their home, contrary to section 42A Criminal Justice and Police Act 2001 and an offence of wearing a uniform in connection with political objects, contrary to s1(1) Public Order Act 1936. The latter offence required the consent of the Attorney General. After a trial at Chelmsford Magistrates’ Court he was convicted of both offences. He received a fine of £425 and was made the subject of a restraining order to prevent him from harassing Mrs Munawar.