Remember this next time you buy your Kebab (from a Turk), say Britain First Facebook posters 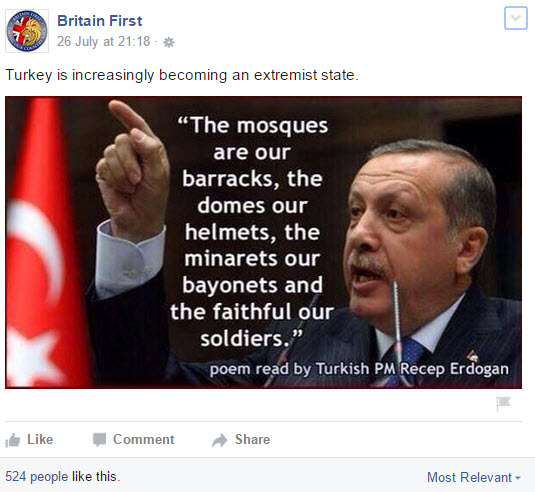 The precarious situation in the Middle East has come to the forefront, with the bombing of ISIS positions by the Turkish Air Force. Having taken the decision to militarily degrade ISIS, it seems that Britain First and its supporters have decided to vent their fury at Turkish President, Recep Tayyip Erdoğan.

The anti-Muslim and anti-Turkish bigotry simply drips of the Facebook pages of Britain First as the extremist group posted this picture on their Facebook page. No doubt, the reference that they used was as vague as trying to find the genetic make up of Dolly the sheep in the dark with a match. The post was followed by a range of comments including this one which we did not know whether to laugh or cry about:

Further dubious comments made on the Britain First Facebook page are listed below and we will be calling on Facebook to ban the Britain First Facebook page. They have not done so yet, since their stance has been that Britain First are a political party. Clearly, their activities are drawing in a specific set of individuals, some of whom have extremely disturbing views about Muslims and some of whom espouse violence against Muslims. Given the recent comments by the Prime Minister outlining the Government’s strategy over the next 5 years, we believe that the ground has changed and it is precisely this kind of activity that the Prime Minister wants social media companies to take action against. Note the following comments on the Britain First Facebook page:

Leslie Bowe states, “Let’s send all the Muslims to Turkey, and all the Turks with them.”

Ryan Fieldhouse plays into the persecution complex of a ‘war that is looming’. He states, “a war is looming…..who with, whatever the time and wherever the place.” Clearly, he seems lost in time and space.