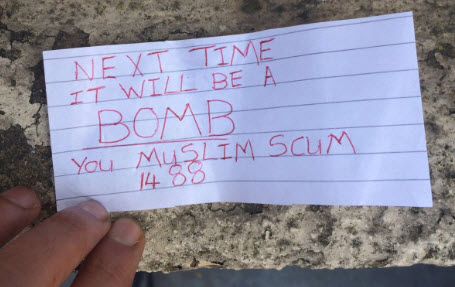 As we have mentioned time and time again, the Rotherham grooming scandal has been seized by on by extremist and far right groups like Britain First and further whipped up to create racial and religiously based divisions, which assists no-one but extremist groups themselves.

In fact, there have been a series of very disturbing incidents in Rotherham that we have highlighted here, here and here.

Rotherham remains a flash point for tensions with South Yorkshire police, civil society groups and faith groups picking up the pieces of what has been a soul-searching time for the town and its statutory agencies.

The current threat against a mosque in Rotherham, raises anti-Muslim hatred to another level and with the neo-nazi terminology of 1488 also listed on the threat. The pictures of the material that were sent to the mosque in Rotherham this morning, are below.

The text on the threat states:

We will be passing on this material to the police and urge members of the public in Rotherham to remain vigilant. Please report in any material, threats or intimidation that is targeted at mosques or other institutions and we are here to assist and to work with police forces.