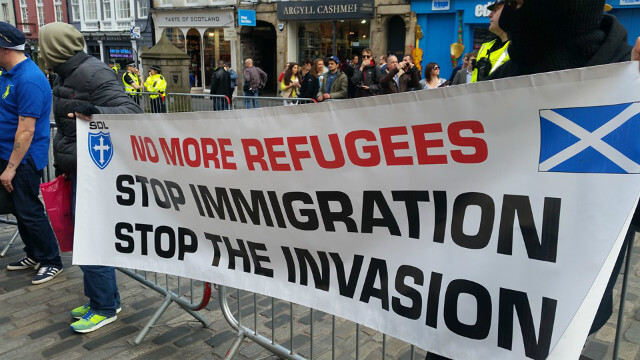 Social media posts confirmed that individuals had driven from Nottingham and Bradford to attend.

Like in Dover, the protest brought together individuals linked to or inspired by National Action, Combat 18, the Scottish and English Defence Leagues, North West Infidels, Misanthropic Division, Central Scotland Infidels and Blood and Honour. This protest, however, passed without violence or arrests.

Chief Inspector Bob Paris told the National: “I would like to thank the wider public for their patience and hope that the minimal disruption during the events did not spoil their day.”

A Unite Against Fascism counter-protest brought together minority communities and speakers from the SNP, Labour and Green Party.

Chants of “Refugees welcome, Deport the Nazis,” were said to have drowned out the vocal far-right minority.

Police Scotland had escorted the far-right groups to the City Chambers as they did not have permission to gather at Waverley Station.

One protester held a sign that read ‘Stop the Invasion Say No to Islam Say No to Mosques Say No to Halal Say no to Europe’. Others threw Nazi salutes – as one person wore a jumper promoting the infamous neo-Nazi punk band Skrewdriver.

In contrast, the Stand Up to Racism event drew between 2,000 to 5,000 people in Glasgow on March 19. It coincided with other marches in London and Cardiff to mark UN anti-racism day.