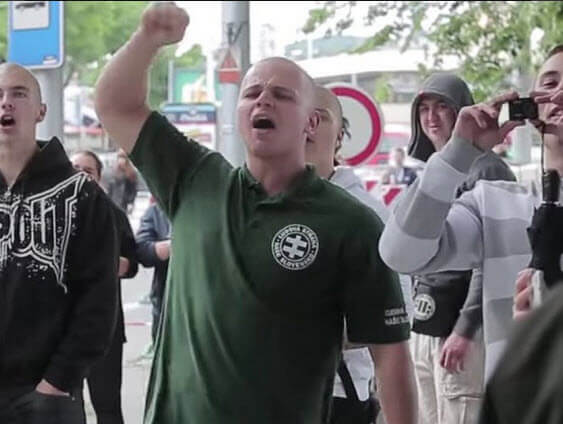 We have highlighted the shocking revelation of how neo-Nazis have been elected onto Slovakia’s Parliament and which we highlighted through our sister site, Religious Reader.

Below is a video of Milan Mazurek (aged 22) and who can be seen in the green shirt in the video shouting abuse to Muslims in Slovakia. He has been elected into the Slovak Parliament through the ‘People’s Party Our Slovakia’ ticket, also known as Lidova strana Nase Slovensko – LSNS.

Mazurek is seen shouting at a group of Arabs and Pakistanis or Bangladeshis and the group refers back to Turkey and the history of Ottoman rule in the area and which was turned against the family who it can clearly be seen, needed police protection around them. The aggression from Mazurek and the group of young men is evident as the family cower as the police usher them away. Comments abusing the sexuality of the Muslim women and linking them to terrorism are made and the comments are grossly offensive and targeted at the Islamic identity of the family. Further anti-Muslim comments are made about the faith of the individuals in the video.

Mazurek has previously stated his admiration of Adolf Hitler and is an active member of LSNS. He was also sighted in an anti-Islamicization protest that took place in 2015.