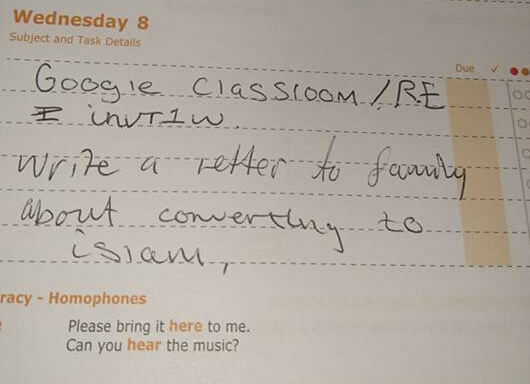 A stepfather who refused to let his 12-year-old stepdaughter finish a homework assignment about converting to Islam had ‘liked’ various far-right Facebook pages and shared videos from ex-English Defence League founder Tommy Robinson days before the story went viral, it has emerged.

Mark McLachlan, 43, from Houghton-le-Spring, near Sunderland, uploaded a photo of his stepdaughter’s homework planner on 3 November to Facebook, adding that he will ‘help’ her with the homework which was due days later. His appended suggestions included writing, ‘For many years Muslim groominggangs have been preying on the infidels children’, and ‘’ll be able to wear a hijab in the bank and petrol stations when normal people can’t even wear a helmet’.

Coverage in the MailOnline, the Sun and Metro, however, present him more neutrality, as a parent who has raised his concerns in a reasonable manner. He told the Metro and MailOnline that he has no ‘problem with them learning about religions’ but questioned the ‘inappropriate’ nature of the homework exercise.

Both stories quote one member of the public who shared his outrage, excluding the hundreds of vitriolic comments about Islam and comments criticising Mr McLachlan, which the posts had attracted. One comment which Mr McLachlan agreed with on Facebook included the statement that Islam is a religion of hate, with the person in question pondering if the school would also teach students about bombs, rape, and beheadings. 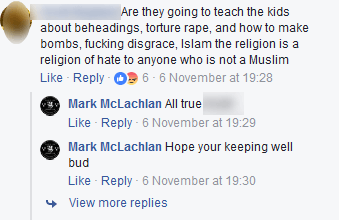 On 6 November, Mr McLachlan shared a YouTube video which described Islam as a ‘terrorist’ cult – three days before the MailOnline story appeared online. 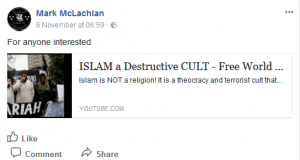 The MailOnline and others were criticised last year for its coverage of a similar homework assignment for Year 8 students at a Guernsey school. This assignment was designed to test their knowledge, to write objectively, and reflect with empathy on how their parents would react to such a change, in a fictitious exercise. Teachers added the caveat that students were, at no point, converting to Islam.

Ofsted rated Kepier School ‘Good’ in January 2016, but added more was needed to equip students with ‘the practical experience of the many cultures that make up modern Britain,’ an example of this change concerns their Interfaith Awareness Week in November 2016. For example, students in Years 7 and 8 built Diya lamps for Diwali, as Christian and Islamic groups visited students in special assemblies to talk about their faiths. The week concluded with a visit to a local church, according to a school publication. Other inclusive examples include a banquet to celebrate Chinese New Year.

Update: MailOnline followed up their initial coverage with an interview with Mr McLachlan.