The Telegraph newspaper claimed on Friday that “half of Britain’s imported coronavirus cases originate from Pakistan” but the figure, of just 30 cases, is said to represent half of the imported infections into the UK since June 4.

Charles Hymas, the newspaper’s Home Affairs Editor, tweeted: “It is based on our understanding of PHE data” in response to a query from Hamza Azhar Salam, a journalist who contributes to The News International, who was encouraged to contact Public Health England.

A spokesperson for Public Health England confirmed the small figure of around 30 cases since June 4, in a statement to the News International.

As one major study found, however, a clear majority of coronavirus came to the UK from Europe, with 75 per cent of initial cases alone followed periods of travel from Italy (14.4 per cent), Spain (33.6 per cent), and France (28.5 per cent) between the end of February and the end of March. Moreover, the study reported that throughout mid-March, the UK had welcomed 20,000 inbound passengers per day from Spain.

The Telegraph coverage also appears to suggest that Pakistan is reporting 4,000 new Covid-19 cases per day since March 1, a date from where 65,000 people flew from the country into Britain.

Pakistan had, for a brief time, suspended commercial air travel between March 21 and April 4, to curb the spread of coronavirus, which caused anxiety for those seeking to return to the UK on chartered flights.

Pakistan’s Health Ministry did not confirm a single-day rise of more than 4,000 cases of coronavirus until early June, however.

Sayed Bukhari, who is the special assistant to PM Imran Khan, called the coverage a “hatchet job” in several tweets.

A change.org petition which has over 3,500 signatures as of writing, is calling for IPSO to investigate coverage in the Sun, Telegraph, and MailOnline, as it calls for apologies and corrections from each title.

It asks that Public Health England are more transparent in its reporting, more so, as factors including systemic racism, discrimination and social inequalities are factors in the disproportionate deaths among black, Asian, and minority ethnic communities from Covid-19.

Tell MAMA also received several reports from members of the public who expressed their concerns about the misleading and inflammatory coverage.

The Sun’s coverage followed a similar pattern: a speculative and inflammatory headline, rebuffed by the actual figure of 30 imported cases specified in the fourth paragraph. Its headline, however, read: “Half of UK imported coronavirus cases ‘originate from Pakistan’ amid calls for tougher checks on ‘high risk countries’.”

Coverage, in the MailOnline, did acknowledge the month of June its headline, with its first subheading providing context for the sensationalised headline. 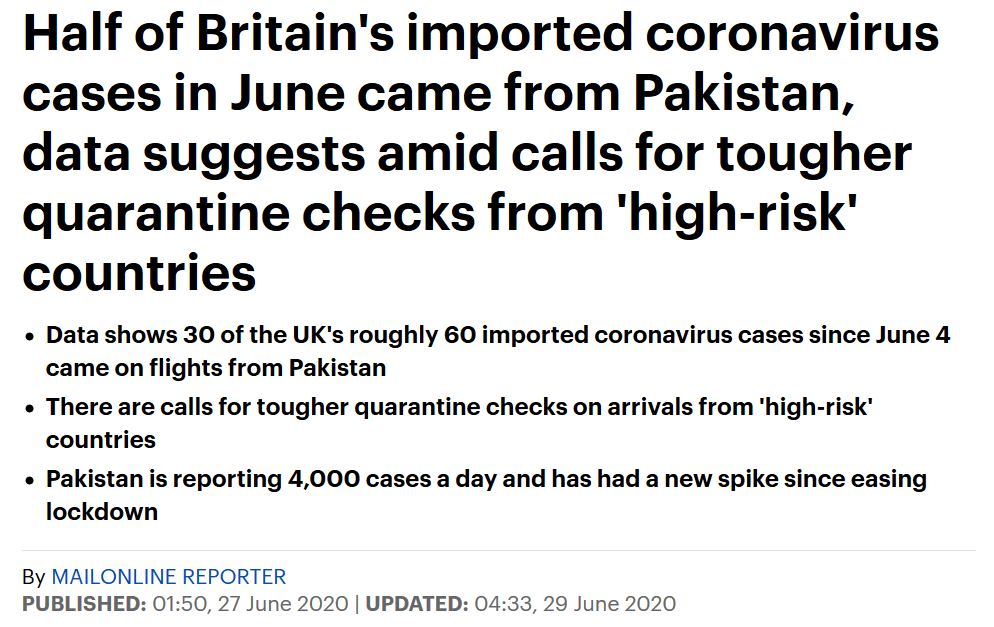 It also mirrors coverage the Telegraph as it appears to suggest that Pakistan has reported 4,000 coronavirus cases per day since March 1.

A recent policy shift, which took effect on June 8, mandates self-quarantine for all arrivals into the UK (which some small exceptions), with a breach resulting in a £1,000 fixed penalty notice in England.

The Sun has amended its misleading original headline which had read "Half of UK imported coronavirus cases ‘originate from Pakistan’ amid calls for tougher checks on ‘high risk countries’.” pic.twitter.com/Xpf8v849Tk

The MailOnline has, today, acknowledged its amendment to a misleading and inflammatory headline about imported Covid-19 cases into the UK from Pakistan.

The Sun published its own correction yesterday.

Read our analysis on this issue from 2 days ago: https://t.co/FLBHK7R0F0 pic.twitter.com/ca58PEXNne