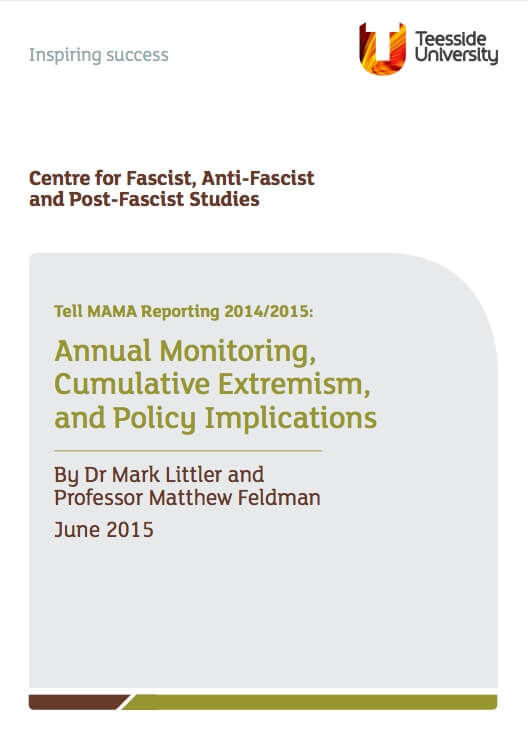 – A decrease from the previous report but that reflects the documented spike of incidents following the murder of Drummer Lee Rigby in 2013/2014.

– In the online sphere, a vast proportion of incidents were abusive in nature and nearly a fifth involved threats.

– The ‘memeification’ of anti-Muslim hate online was traceable with a high number of ‘anti-Muslim literature’ incidents.

– 44 offline cases noted that the individual, at the time of the incident, wearing traditional Islamic clothing during and the perpetrators’ were overwhelmingly white male.

– The evolving data coding and approval process carries a good degree of confidence from CFAPS’s analysis.

Another worrying trend highlighted in the analysis detailed how global acts of terror – whether in Paris, Copenhagen or Sydney – inspired or at least fostered an environment where individuals felt justified in spreading anti-Muslim hate either on social media or on a street-based level. In the wake of the Paris atrocities, the number of reported incidents for offline and online incidents increased.

How sections of the media portrays these incidents potentially (and often unintentionally) may inspire part of the backlash. The report does not call for censorship but engagement with media outlets to promote a more nuanced understanding of ‘terrorist motivations in order to reduce the impact of coverage relating to, or even fuelling, instances of ‘cumulative extremism’.

The dataset offers a window into the levels of anti-Muslim hate in 2014 and the early parts of 2015. But a perceived mistrust of police in sections of Muslim communities means underreporting of incidents remains a consistent problem.

Our working agreement with the Association of Chief Police Officers (ACPO), agreed upon in March 2015, to share data on anti-Muslim incidents (with police forces that record Islamophobic crimes under a separate flag) will continue to strengthen our reporting in the months ahead.