Of over 2,000 contacts made with Tell MAMA in 2018, Tell MAMA recorded 1,282 anti-Muslim or Islamophobic reports, of which 1,072 were verified as being classified as such, through secondary evidential sources. 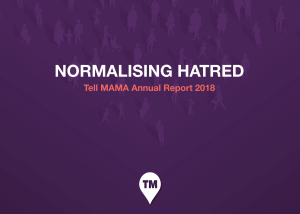 In addition, Tell MAMA received reports of 1,891 anti-Muslim hate crimes and incidents from 20 police forces in the U.K. which Tell MAMA has data sharing and information agreements with. (These details do not overlap with the Tell MAMA data sets). In total, we received 2,963 anti-Muslim hate incidents in 2018, including Tell MAMA and police data sets.

In 2018, two significant spikes occurred. The first, in spring, reflected the ‘Punish a Muslim Day’ letters sent to Muslim homes, institutions, and places of work in March, followed by heightened tensions, fears, and anxieties around the proposed day in April, and the second wave of letters (‘Punish a Muslim Day 2’), received in May. In total, Tell MAMA received reports of 37 offline (street based) incidents which directly referenced ‘Punish a Muslim Day’.

The second and more significant spike occurred in August after the former foreign secretary Boris Johnson a column referring to veiled Muslim women as ‘letterboxes’ and ‘bank-robbers’. In the week following his article, anti-Muslim incidents increased by 375% – from 8 incidents the previous week, to 38 in the following. Of the 38 anti-Muslim hate incidents in the first week following Mr Johnson’s comments, 22 were directed at visibly Muslim women who wore the face veil (niqab) or other veiling practices. We recorded a total of 57 incidents in the three weeks following the column’s publication, 32 of which were directed at visibly Muslim women. Between the 5th and 29th of August, 42% (24) of the street-based (offline) incidents reported to Tell MAMA directly referenced Boris Johnson and/or the language used in his column.

Verbal abuse (abusive language), accompanied many of the anti-Muslim incidents. We analysed the trends in language, finding several themes; terrorism, paedophiles, hatred of foreigners, blame, competition, insulting/derogatory remarks about Islam, and expressions of confidence by the perpetrator that no punishment will follow.

The online 2018 Tell MAMA dataset includes 327 verified reports, down 10% from the 2017 figure of 362 verified reports. A clear majority of reported abuse occurred either on Twitter (175 reports/incidents) or Facebook (92 reports), with a small minority having occurred on YouTube (8 reports). The ‘Other’ category (52 reports) includes communications sent over email or posted on internet forums. As with the previous dataset, we categorised most online cases as Hate Speech (168 reports) and Abusive Behaviour (96 reports). Threats accounted for 12 reports, while Anti-Muslim Literature remains present in a clear minority of cases (50 reports).

Most commonly, anti-Muslim attacks/incidents in 2018 took place in public areas (209). Incidents which took place within, or targeted the victim’s household or private property, increased by 11% (101 to 113), and those occurring in the victim’s place of work have risen by 8% (74 to 80) since the previous year.

The rising instances of discrimination, hate speech, and anti-Muslim literature indicate that a more general intolerance and hatred is growing. These typologies are seldom prosecutable by law and have proven more difficult to achieve satisfactory outcomes and solutions for victims. Similarly, this year we analysed the trends in verbal abuse, finding a common theme whereby perpetrators use language attacking Islam and religious practices alongside, for example, anti-Muslim hate incidents that range from abusive behaviour, discrimination, or threats. We, therefore, emphasise the gravity of attacks on Islam in tandem with hatred directed at individuals or institutions. The two are interconnected, thus hatred and intolerance must both be challenged simultaneously.

Gender of Victims and Perpetrators