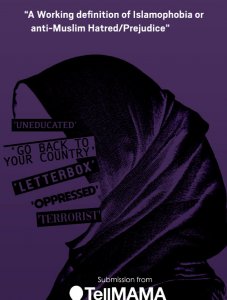 Tell MAMA is delighted to contribute to the APPG on British Muslims inquiry into a working definition on Islamophobia/anti-Muslim hatred. We hope that our submission can help further the debate.

Now, more than ever, it is important to define what is a growing problem, in the hope that with further understanding, that we can support Muslims and challenge institutional and non-institutional forms of Islamophobia and anti-Muslim hatred.

Our recent annual reports, published in 2018 and 2017, which cover the 2016 and 2017 reporting cycles, have used the terms Islamophobia and anti-Muslim hatred (and/or prejudice) interchangeably, partly for brevity because the term is established in existing academic literature and used by police forces nationwide when logging hate incidents and crimes.

Tell MAMA believes any definition of Islamophobia or anti-Muslim hatred should always centre on the voices and experiences of Muslims. We welcome further understanding of this issue in the hope that the debate can move beyond semantics whilst ensuring that fundamental rights are taken into consideration. From a research perspective, John Gerring argued: “to deprive the social science community of certain words, or of certain uses of commonly understood words, is bound to create confusion, and also to limit the usefulness of social science as a way of apprehending the world.”

Some perpetrators in our dataset demonstrate a disproportionate hatred of Islam which often has little to do with attacking or abusing Muslims directly. Therefore, we cannot always detach how some display a hatred of Islam from a hatred of Muslims. We affirm the fundamental right of freedom of expression and speech, but it comes with a responsibility to not harm others or threaten or incite violence.

Previously Tell MAMA has used a reworked version of the International Holocaust Remembrance Alliance (IHRA), working definition of antisemitism: “A certain perception of Muslims, which may be expressed as hatred or outward hostility towards Muslims. Hatred may take the form of anti-Muslim rhetoric and physical manifestations that are targeted towards Muslims (or non-Muslim individuals considered to be sympathetic to Muslims) and/or their property; or towards Muslim community institutions or religious and other related social institutions”.

At the root of the value system of Tell MAMA’s work is the defence of free speech given that these are hard won rights and any infringement on free speech creates a long-term chilling effect on thoughts, ideas and discussions. This is fundamentally corrosive to society.

We therefore believe that religion can be disliked, mocked or ridiculed and whilst such beliefs and actions will naturally be disliked by many people of faith, they mainly fall into the bracket of free speech. Where they move into the bracket of anti-Muslim bigotry is when these views and beliefs attempt to target and curtail the right of British Muslims or when they attempt to bestialize and caricature Muslims as a whole. Tell MAMA therefore looks at such issues on a case by case basis and whilst many cases of anti-Islam speech fall into the bracket of free speech, there are cases where this also tips into anti-Muslim hate or Islamophobia when there are impacts on people, communities and institutions. It is the latter – impacts on people, communities, institutions, work environments and in the delivery of goods and services where Islamophobia or anti-Muslim hatred has impacts and which we assist victims on and record and monitor. This also includes supporting individuals who have suffered structural institutionally based anti-Muslim bigotry.