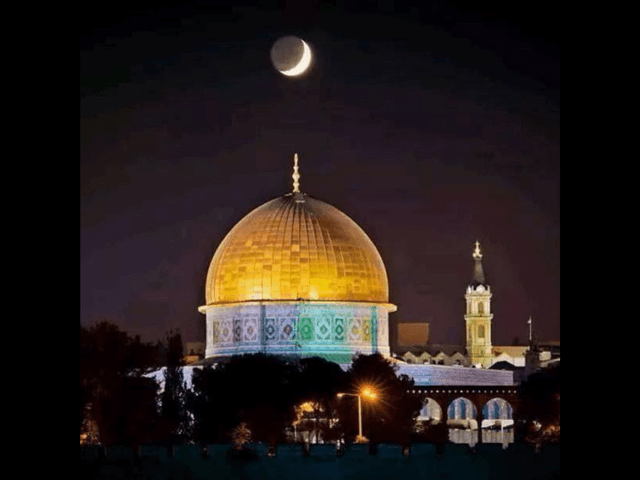 We understand the deep impacts that Jerusalem and the Al Haram Al Sharif have on British Muslim communities in the UK. We also acknowledge the thousands of years of Jewish history that are connected to Jerusalem and the Holy Land, as Muslims have a link to the Holy City for over 1,400 years. Each has a stake and each has a history that is written on the other and where each yard of Jerusalem is contested. That is why when tensions rise in Jerusalem, they are felt across the globe and where Islamic history is linked to the Al Haram Mosque and the mosque of Al Aqsa and the Dome of the Rock. Islam’s link to Jerusalem runs deep through association with the Prophet of Islam and with being the first Qibla or point of call for prayer before Mecca. It is a connecting point for Muslims between this earth, the divine and all of the Prophets of faith in monotheism. It is therefore a central part of Islam’s link to the divine and is seen by Muslims in that context.

We know that as tensions rise in the Al Haram Al Sharif, (also known as the Temple Mount), there is the potential for Jewish faith institutions or cultural centres to be targeted for graffiti or broken windows or for online anti-Semitic comments. Jewish communities, through the work of the Community Security Trust, have demonstrated that there are links between tensions in the Middle East and a rise in attacks against British Jews. This is unacceptable and everyone who cares about the future of their children and their communities, should feel a revulsion that this is the case. We are therefore re-asserting the fact that the best of Islam and Muslims are based on campaigning for social justice and for the rights of others and at this time, let us re-enforce the fact that British Jews are not responsible for the actions of the Government of Israel and that they have no way of influencing actions in the region at this time. They deserve to live their lives free from fear, intimidation and harassment. They are also part of our local, regional and national family – a family that is based on the belief that what matters – are people and their dignity and care.

It is also clear that the killings of 2 Israeli policemen in the Old City in Jerusalem has led to this position. The trigger factor and the killings of 2 people on duty cannot and should not be regarded as anything other than murder and the pouring of fuel on the emotions of Jews and Muslims, when the Al Haram Al Sharif and Temple Mount mean so much to local Muslims and Jews.

Furthermore, such incidents do not mean that the Government of Israel can be given a free pass for what is an occupation that has gone on for decades and that impacts on Palestinian lives through checkpoints, barriers, reduction of employment opportunities, travel restrictions and the killings of many Palestinians under circumstances that leave questions for their families which are not addressed. Many are young people whose lives have been cut short in violent circumstances. Yet, we also must acknowledge that Israeli Jews have been the subject of terrorism, suicide, rocket and vehicle attacks that have created enormous fear within a population which feels embattled, just as the Palestinians feel and voice on a daily basis. We therefore cannot accept and will not accept the killings of innocents on both sides which makes no-one safe in the region. Justification for any group that kills innocents in the region for political reasons, irrespective of which faith or community they come from, is justification for terrorism and that is never acceptable. Any group in the UK voicing such support for any groups which back the political killings of innocent men and women going about their lives and duties in Israel or Palestine, should be highlighted in their support for terrorism. Let us call it what it is.

That said, British Jews cannot and should not be seen as anything other than friends, citizens, neighbours and partners for a better society in our country, the UK. Whilst Muslims and Jews may have differences of opinions on Israel and Palestine, they can be conducted in a manner of civility and with a belief that we should stand up for each other’s rights if they are undermined in the UK. So we urge those reading this post, that we do all we can to send messages of trust and re-assurance to each other at this time. We cannot be anything other than agents of positive change, caring for our Jewish brothers and sisters at this time in our country.