The Only Extremists We See Are the ‘Britain First’ Sympathisers Here 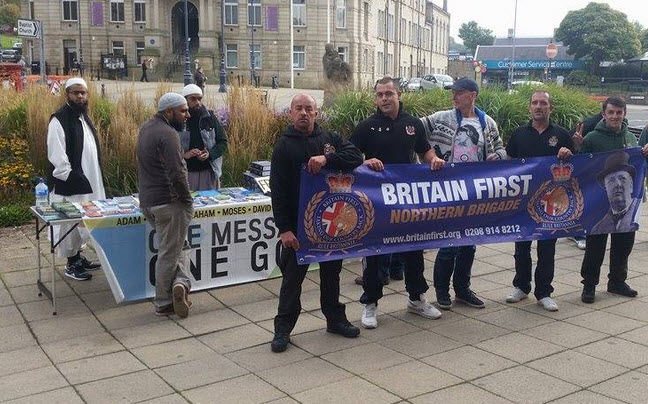 What would you do if a small group of Christian volunteers put up a stall, in the inimitable style of us Brits, and decided to break down barriers of understanding so that people could understand Christianity more?

It’s the kind of thing that happens up and down our country with no problems. Now what if the small bunch of volunteers were ambushed by Muslims holding up placards and taking pictures of the group whilst touting Al-Muhajiroun flags? Surely, the Daily Mail and the Star would be up in arms about how ‘Christians were being ambushed by Muslim extremists?’

Well flip to this situation today. A group of Muslims whose idea of supporting better community relations is to hold a stall where people can turn up and talk about Islam. Sound anything untowards – not at all. Add to this that the group of Muslims also hand out water bottles and help the elderly by carrying their shopping to cars and sometimes to the Church where they want to pray. You would get the impression that they were stalwart citizens and that they were generally caring and law-abiding young people.

Well not according to the extremist far right group, Britain First. Today, a group of 5 Britain First sympathisers, (some of whom looked like a hard trek up a mountain could seriously affect their health), turned up, abused the Muslim volunteers and then decided to take the following photoshot. This was after they carried on with their abuse against the volunteers.

To add insult to injury, they then posted the picture up on the Britain First Facebook page, with the following statement: “WELL DONE TO OUR NORTHERN ACTIVISTS WHO CONFRONTED ISLAMIC EXTREMISTS IN DEWSBURY! OCS.” (Note the caps since they get all shouty – something that seems to be an associated trait with the far right).

Such language is potentially dangerous to the well-being of the Muslim individuals in the picture. The three individuals who were volunteering should report in any anti-Muslim statements either to us or directly to the police, through 101. We would also urge them to try and get legal advice given what has been said about them.

In the meantime, if anyone has any further information on this matter, please do not hesitate to contact us.