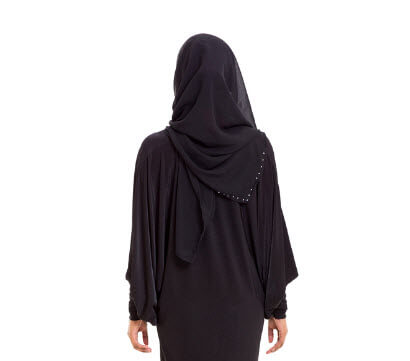 Natalie wears a Niqab and a Hijab and is a convert to Islam. On the 30th of June,  she was standing outside a bus stop in Leeds with her two children, aged 1 and 3 years old.  Natalie described to us how an elderly gentleman started to shout abuse at her for no apparent reason and came close to her reaching out at her Niqab.

Natalie said that the man stopped short of assaulting her in front of her two children and he said that someone “should rip that thing off our face.” He also said that Natalie, (who was born in the UK and whose family is English), should, “leave our country and go home.” All of these comments were heard by the young children who were crying as they saw their mother being abused.

The abuse continued with no respite as the perpetrator stated that Natalie was a “foreign bastard“, “looked like Hitler“,  and that she “was good at breeding.”

Natalie said nothing, fearing for her safety and did not move until he gave up and she ignored him until his bus arrived. She waited for another bus and by that time other people had arrived.

After the perpetrator had gone, Natalie’s 3-year-old asked her why he was so mean. She talked a little with her son and he started praying for the man by saying ‘Allah’ a few times in a child ‘sing-song’ manner and Natalie noticed that a woman at the bus stop started to back away on hearing her child and with a look of fear on her face.

Natalie’s words also express the impacts on families and on children who see their mother humiliated and targeted in front of them. These are her words and her story of the daily ritual of humiliation and abuse she receives.

“When we got off our bus and into Leeds bus station, another woman passed us and as she did so, she looked me in the eye and called me stupid with much scorn in her face. My lad was very confused by this. He tried asking me questions and talking about it, but he is 3 years old, he’s expressive skills are a little lacking.

On our final bus home, he had a huge tantrum. The likes of which he’s never had before, with screaming and crying and kicking and trying to bite me. After he calmed down he said sorry and that he didn’t know why he’d done that and he was scared of getting into trouble. He’s a good boy, Mashallah, and I understood that he’s built up emotions from the days dramas had exploded out of him in that instance. I then showed him that not all people are mean, as he apologised to the people on the bus, they were all smiling at him and thankful for his apologies, one even praised me on my parenting, which worked some way towards relaxing him. He didn’t sleep well that night, but he’s fine now.

I’m reporting this, not for attention or to cause trouble, but in the hopes that by making a report, it might go some small way towards improving the standards of education in the Yorkshire area (and the whole of the UK insha’Allah). I do not dislike these people who have upset my son, rather I feel for them as their education in their youth has likely not worked to help their understanding of diversity. Even these days, diversity studies are normally focused on the younger generations. Heck, even my education in secondary school of Islam was bias (and I’m 27), so I can fully understand some people’s prejudices.

I am used to people giving me abuse because of my faith and how I dress, even my colour to some extent, (I’m white British), but my children don’t deserve that. It’s left me feeling unsure about taking them out again. We’ll certainly not be going far from home anytime soon.

I hope that by sharing experiences, good might occur. Insha’Allah.”