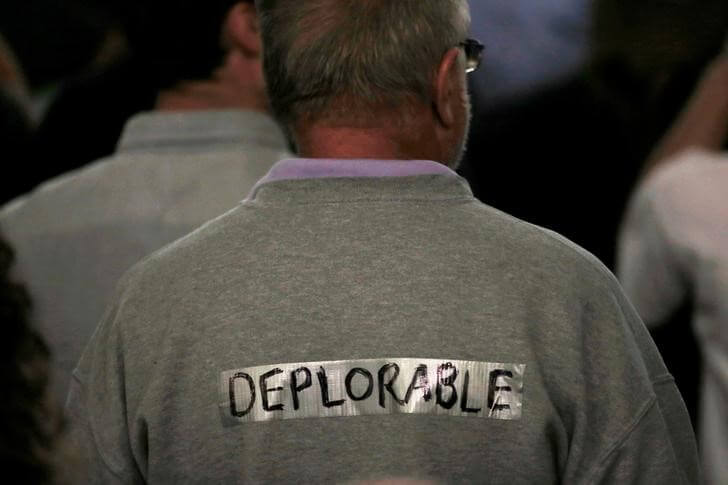 Supporters of U.S. President-elect Donald Trump have appropriated the phrase “basket of deplorables” – used by Hillary Clinton during the campaign to pillory some of his backers – to plan an inauguration party called the “Deploraball.”

But while the intention might be to mock the defeated Democratic candidate, the planned gathering has revealed a deep schism within the ranks of a movement known as the alt-right: pitting those embracing white nationalism or outright racism against those seeking a more credible platform for hard-right conservatives.

The party will be held at the National Press Club in Washington the night before Trump is sworn in on Jan. 20, when many official inauguration events are taking place.

Organizers say the Deploraball is a cocktail party for Trump supporters from all ethnic backgrounds and no incendiary or discriminatory actions will be allowed. Organizers call themselves “Trumpists” and say they have sold 1,000 tickets ranging in price from $99 to $2,500. But after an online battle between star guests, Deploraball organizers offered ticket holders refunds “in light of recent events.”

One of the original organizers of the ball, alt-right social media personality Tim Treadstone who is commonly referred to by his online persona “Baked Alaska,” has been disinvited after tweeting several anti-Semitic comments, setting off angry exchanges among members of the alt-right on Twitter.

Another featured guest at the party, Mike Cernovich, has condemned Treadstone for appearing anti-Semitic and homophobic.

“The lines are drawn and the fracture is more or less complete,” he said.

Cernovich, an architect of viral Internet trends promoting rumours of Clinton’s supposed ill health that have been credited with helping push Trump to victory with the support of the alt-right, said he has rejected the alt-right’s descent into white nationalism.

The alt-right movement, which came to the fore during the presidential campaign, is a loose grouping that rejects mainstream politics and includes neo-Nazis, white supremacists and anti-Semites. It had previously been more widely embraced by libertarians and the far-right fringe: people more opposed to the concept of political correctness than to racial or other diversity.

Trump has been criticized for naming Steve Bannon, former head of the Breitbart News website that is closely linked to the alt-right, as a senior White House adviser.

Days after the Nov. 8 election, the movement was strongly criticized when some Trump supporters gave Nazi salutes to alt-right leader Richard Spencer, president of the National Policy Institute, during a gathering in Washington to celebrate Trump’s victory.

The incident prompted some figures linked with the alt-right to assume the term “new right” to describe themselves instead.

In an interview with New York Times journalists last month, Trump condemned the alt-right conference organised by Spencer. “I condemn them. I disavow, and I condemn,” Trump said.

After Treadstone posted anti-Jewish tweets over the past week, Cernovich told him not to repeat the so-called “hailgate” scandal at Deploraball.

“No Nazi salutes … or don’t have your name on the event,” Cernovich wrote in a series of insult-filled text messages to Treadstone that were later posted on Twitter.

The argument raged on social media between the two southern California-based men, who were once friends, egged on by their fans.

“You used the movement and now you want to distance yourself from it,” Treadstone, wearing pastel-coloured camouflage apparel and a bleached blond beard, said in one 45-minute video post.

The Republican president-elect, Trump, has not been formally invited to the event nor is he expected to attend, but “of course we’d be thrilled if he did,” said one organizer, Jeff Giesea. Trump’s transition team was not immediately available for comment on the party.

In remarks she quickly said she regretted, Clinton told a fundraiser in September that Trump had given voice to hateful rhetoric through his behaviour as a candidate and that “half” of his supporters belonged in a “basket of deplorables.” Trump supporters seized on the phrase as typifying snobbish put-downs by coastal elites.

The Deploraball was initially planned for the Clarendon Ballroom in Arlington, Virginia, but organizers said the venue was switched because of pressure on the Clarendon from Clinton supporters. The Clarendon, a private events venue and nightclub, denied that and said in a statement it decided not to issue a contract “due to the suspicious actions of the organizers.”

Performers will include singer Scott Isbell and classical pianist Stephen Limbaugh, according to the organizers, who have also invited rapper Kanye West but have not heard back. Treadstone, a former rapper and orchestrator of pro-Trump flash-mobs, had also been scheduled to perform.

Yiannopoulos has been criticized for comments he has made about Muslims, Black Lives Matter activists and feminists. Twitter banned him in July for inciting harassment of the actress Leslie Jones. The Hollywood Reporter reported on Thursday he had secured a book deal and quoted him as saying, “They said banning me from Twitter would finish me off. Just as I predicted, the opposite has happened.”

Treadstone said the main difference between himself and the so-called new right, including Cernovich and Yiannopoulos, is the explicit support of white nationalism.

“If you don’t support white advocacy, you cannot be alt-right and that’s where a lot of people are running into a problem,” he told Reuters.

Cernovich, who says Treadstone is increasingly fixated on Jewish conspiracy theory, said the branch of former alt-righters he belongs to are more inclusive and are primarily focused on populism, nationalism and the rejection of “victim culture and identity politics.”

The group also has no clear leader, unlike with white nationalist alt-right, which looks to Spencer, he said.

Giesea described “Trumpism” as a new breed of Republicanism and said it was still a work-in-progress. “We’re in the process of constructing it, and it’s messy,” he said.