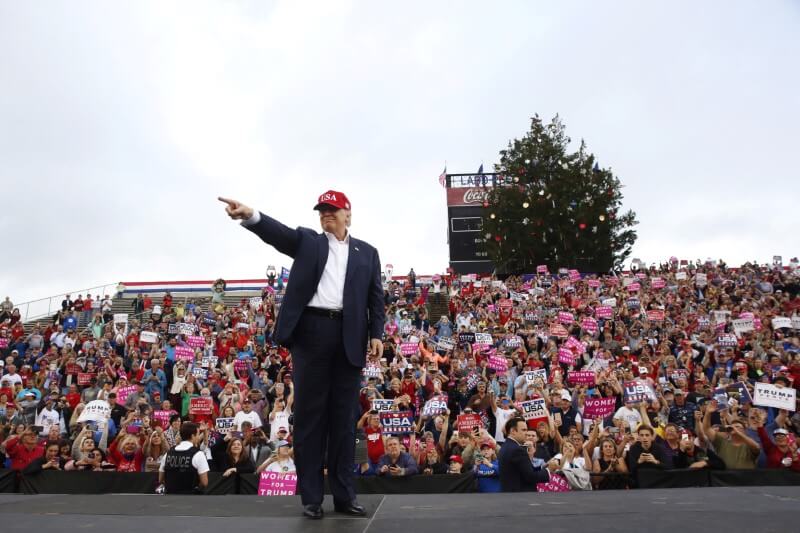 After a tumultuous opening month in the White House, President Donald Trump is heading to a friendlier, familiar and potentially rejuvenating place: the campaign trail.

Beset by vicious fights over his Cabinet, legal setbacks over his immigration orders, the resignation of his national security adviser and an investigation into possible links between his campaign and Russian intelligence, Trump is turning to the winning formula that vaulted him into the White House: big, adoring crowds and fiery, angry speeches.

He has replaced Hillary Clinton, his former Democratic presidential rival, with a new foil: newspapers and TV news outlets that have reported unflattering revelations of dysfunction or other problems in the White House. He has described them as “lying”, “corrupt”, “failing” and, late on Friday, as “the enemy of the American people.”

On Saturday, he holds a campaign rally in an airport hangar in Melbourne, Florida, just up the coast from his Mar-a-Lago resort where he will spend the weekend. The event gives Trump a chance to bypass what he says is an unfair media and take his message straight to his supporters.

“It will remind people that he still has a lot of support out there, and he probably needs the reminder,” said Republican strategist John Feehery. “When you are inside the bubble, it’s not a bad idea to reconnect with your supporters and get re-energized.”

Trump’s race against Clinton was marked by big, boisterous rallies, and the event in Florida is likely to be the first of many as he tries to appeal directly to his most passionate supporters and reframe his image following growing questions over his temperament and ties between his campaign and Russian intelligence.

“I’ve made it a point to cut through the media’s noise and go straight to the American people. It worked during the campaign, and it will work again over these next four years,” Trump said in the email.

Democrats countered with their own fundraising email, seeking donations to ensure “Trump is a one-term president.”

“First he had Republican primary opponents, then he had Hillary Clinton, and now he has the evil media,” said Republican strategist Rich Galen. “He’s very comfortable in this kind of campaign mode.”

The Florida rally marks an extraordinarily early start to the 2020 White House campaign for Trump, who filed re-election papers with the Federal Election Commission (FEC) five hours after he was sworn in as president on Jan. 20. His predecessor, Barack Obama, filed the same form in April 2011, more than two years into his first term as president.

The paperwork was not a formal declaration of Trump’s candidacy, but allowed him to continue raising funds, including the money received from sales of his popular red “Make America Great Again” hats. The Trump campaign raised $9.6 million in December and had about $7.6 million on hand at the end of the year, the last time it was required to file a report with the FEC.

Obama hit the road frequently in early 2009 to rally voters behind his economic stimulus package. But he was also supported by an outside group called Organizing for America that filled some of the role of a campaign organisation by building  grassroots backing for his policies.

By keeping his campaign intact, including his campaign website, Trump has made the concept of a “permanent campaign” into reality. The website, which features a photo of the inauguration, stresses Trump’s campaign cannot stop because “we still have much work to do.”

Trump’s first presidential event outside Washington was on Friday in North Charleston, South Carolina, where he visited an airplane plant operated by Boeing Co to celebrate the unveiling of its latest Dreamliner jet.

On Air Force One after the Charleston event, White House spokeswoman Sarah Sanders said Trump is headed back on to the campaign trail because the media does not always deliver his message well, and “he can do that very effectively by taking the stage and talking to the people of America.”

Trump’s early re-election campaign start has created some confusion for federal workers worried about possibly violating a U.S. law prohibiting them from engaging in political activity in the workplace.

The U.S. Office of Special Counsel, an independent government agency that protects federal bureaucrats from unfair personnel practices, issued guidance to federal workers last week after it said it received “numerous” questions about whether they can express their views on Trump given his intention to run for re-election.

Federal workers would violate the law if they start calling for his re-election or defeat while on duty, the memo said, but since the election is still three years away workers can express approval or disapproval of his policies or actions but “may not display signs in their office that read ‘Reelect Trump in 2020’ or express” views on his candidacy while in the workplace.

Once he formally announces his candidacy, the memo said, workers who are on duty or in the office cannot do anything “directed at the success or failure of his candidacy.”