Trump’s America is a show of brazen male racism 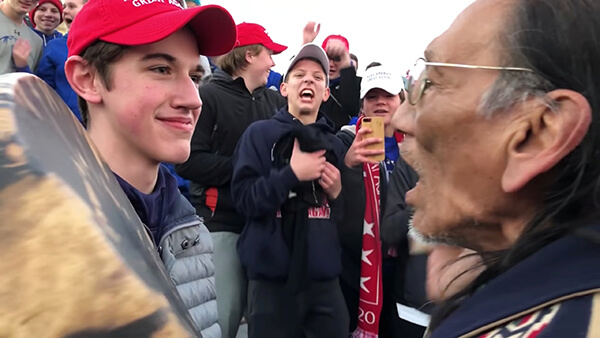 We have all seen it now. A native American, a former Vietnam veteran encircled and jeered at by a group of MAGA-donning boys from a Catholic school. It’s an ugly encapsulation of Donald Trump’s America.

The teenagers came dressed up in the sort of clothes that were not just walking political statements but there to trigger anger. Beyond the anti-abortion slogans, they stopped the Native Americans at the Indigenous People’s March by the Lincoln Memorial. It was heated and tense, and what particularly inflamed anger was the teenager who blocked Nathan Phillips, standing almost serenely but all the while sporting a goading smug grin, supported by his friends.

This is Trump’s America and we should not be deceiving ourselves to think otherwise. He began the week by mocking one of the worst massacres of Native Americans and now it has finished with this. As usual there were conservatives looking for any angle to humanise the teenagers and remove some sense of guilt and offence from him. Videos that emerged later were even more damning of the teenagers, showing them to be almost mobbing the Native American, taunting and laughing.

Firstly, what does it say that a school decided to take their children to a political march? America is embroiled in a time of fierce racial tensions. Why were these, ultimately, children exposed to this? They did not come neutrally but came wearing symbols expressing allegiance to Donald Trump. What might have happened had violence erupted? The teenagers would have become victims and further cemented the far-right narrative that an anti-white genocide is taking place. The school risked their safety by allowing them to enter a potentially dangerous situation.

Secondly, those of from backgrounds of socialism, liberalism and humanism would do well to remember that this was ultimately a teenager. One absolutely soaked in the privilege of being exempt from historical discriminations on race, class or gender, but still a child. Knowledge and deciphering what is morally correct is a process, cultivated carefully from a mixture of inherited values but also exposure to different environments and experience. He is a product of what he was raised in and is still fleshing out his moral compass. Now, anyone with a basic sense of family values would never obstruct an elderly man, nor smirk in his face, but that is another issue altogether. The teenager was maddeningly disrespectful, but we should be hesitant to calling for the destruction of his career or social life. His face is now plastered on social media, circulated globally. He will live with the consequences of his behaviour. But he should be allowed to learn and grow from it too. Brokering a sense of common good and mutualism between different groups can only be nurtured from accepting mistakes in human interactions and wishing to learn from it.

But lastly, what was chilling about this was the brazen display of arrogant, triumphalist rudeness on the part of these teenagers. They racially taunted whilst wearing pro-life slogans. They harassed Native American elders, and they showed that they could do it not just because they wanted to, but they were in power, they were in control. The smirk infuriated many people because it signalled the privilege these teenagers had as affluent white boys which protected them, unburdened by the experiences of being a Native American elderly who would have seen and felt much racism and prejudice throughout his life. They treated him as undeserving of respect and dignity, and that is how you know it is Trump’s America because these are the values he instilled in his campaign when targeting minorities. In the era of toxic identity politics, white nationalism remains cancerous to the advance of liberty, human rights and further democracy.

He has emboldened those harbouring prejudiced views to feel more confident in their bigotry and to wear in literally on their sleeves and head. To don a MAGA cap and racially taunt someone like Nathan Phillips. This is Trump’s America.