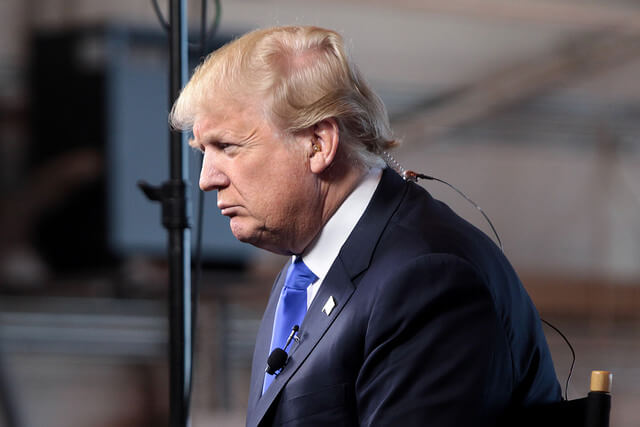 The White House released a list of 78 terrorist attacks to support President Trump’s assertion that “the dishonest press” is failing in its duty to report terrorist attacks. The BBC and the New York Times have disproven Trump’s central claim.

Trump’s carefully worded statement taps into the partisan distrust of mainstream media. This latest dog whistle intends to justify in the minds of his supporters what others argue is unconstitutional.

This section of his statement has that audience in mind: “And in many cases, the very, very dishonest press doesn’t want to report it. They have their reasons, and you understand that.”  Its central aim is to re-energise his support base given recent negative headlines and abysmal approval ratings.

Gallup found that Republicans are fuelling a broader distrust of mainstream media in American society. Trust in media from Republicans fell to 14 per cent from 32 per cent in 2015. A twenty year low for Republicans. And for the first time since 2001, trust in the mainstream media among older generations has fallen below 40 per cent.

The divisive presidential campaign may explain part of this mistrust. According to the Shorenstein Center, 82 per cent of election coverage about policy positions was negative. But it’s an older problem.

Take, for example, this op-ed for Fox News. It blamed the mainstream media for Mitt Romney’s defeat in 2012. Part of the argument reflects the sentiment of President Trump. And it concerns the idea that the mainstream media was more interested in the gaffes of Romney, not Obama.

Is American mainstream media biased? The Pew Research Center found that the ideological groups most likely to agree with this statement are conservative Republicans and liberal Democrats. This ideological difference was previously explored in 2014 and drew similar conclusions.  Almost half of this conservative group list Fox News as their main news source. Trust in Fox News among this group stood at 88 per cent.

Many Americans, however, distrust social media sources. And this includes the ‘one-sided’ nature of news shared by family members. But over half of conservative Republicans see no problem with the latter. Broad levels of trust in Fox News are consistent in other conservative groups.

But is it fair to blame Fox News for such polarisation? Some are not convinced, arguing that cultural shifts and political apathy are the real culprits.

If the goal was to find a connection between media and more partisan elections, we can stop

looking. The culprit turns out to be not Fox News, but ESPN, HBO, and other early cable

Unlike traditional print news, Prior argues, the original function of cable news was to help less educated audiences understand politics when news choices were limited.

Free from ideological constraints, some were more motivated to get out and vote. Thus, reducing the partisan nature of elections in the 1960s and 1970s.

Others argue that partisan news push individuals further away from the political centre.

This relationship creates strong bonds of loyalty. For example, more than half of ‘very loyal’ news consumers are heavily reliant on television news. Loyalty also concerns the choice of news. It’s why 76 per cent of Americans turn to the same news source.

Long before “Pizzagate” were conspiracies about Benghazi. Opinion pieces on Fox News continue to speculate about media complicity in governmental cover-ups.  A narrative which carried over into coverage of the Clinton campaign in 2016.

One example concerns the Lyon factory attack. Breitbart headlined their story: “There Was a Significant Terrorist Attack in France This Week and the Mainstream Media Hasn’t Even Bothered Telling You” on July 15, 2015.

But it ignores key aspects of the case – including the date of the attack. Yassin Salhi, 35, was investigated on terrorism-related grounds. He would later hang himself in his prison cell in December 2015. No media outlet ignored the story or dismissed the terrorism angle.

Yet, this single Breitbart story received thousands of Facebook shares.

President Trump’s own media habits help us understand this latest controversy. He teases interviews on Fox News like upcoming episodes of The Apprentice.  He dismisses mainstream media as ‘fake news’.

Alex Jones, the voice of Infowars, told listeners that Trump thanked him for aiding his victory.

The Munich shooter, Ali Sonboly, who took inspiration from the neo-Nazi terrorist Anders Breivik, is not on Trump’s list. He carried out the attacks on the anniversary of the Utøya massacre. His targets were students of migrant backgrounds. There’s no mention of Thomas Mair, the neo-Nazi terrorist who murdered Jo Cox MP. Or the terrorist attack on Muslims at a Quebec City mosque.

The mother of murdered British backpacker Mia Ayliffe-Chung has criticised Trump’s decision to include her daughter’s murder in his list. Rosie Ayliffe’s open letter pointed out that terrorism was discounted as a motive. She added: “My daughter’s death will not be used to further this insane persecution of innocent people”.