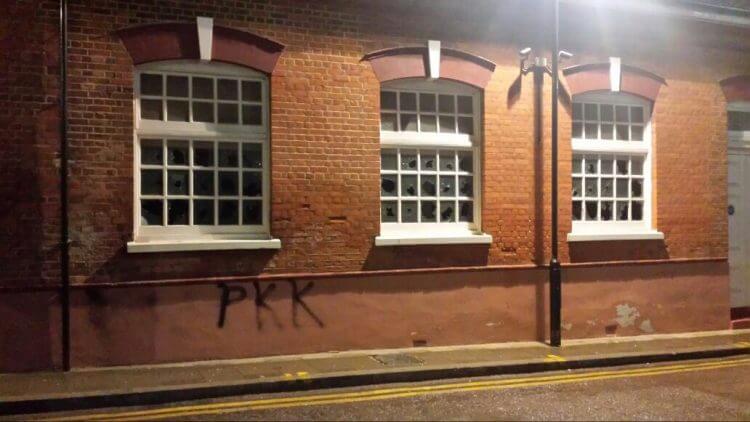 A Turkish mosque in the Hornsey area of London was vandalised with Kurdistan Workers’ Party (PKK) graffiti last night.

Hornsey (London) Turkish Mosque has been attacked last night by PKK terrorists.They broke all the windows of the mosque a smeared the walls. pic.twitter.com/HZtmkbUJpx

Stones were said to have broken windows along one of the mosque’s front walls, according to the Daily Sabah. Turkey’s Presidency of Religious Affairs (Diyanet) run the mosque.

The UK has listed the PKK as a proscribed terrorist organisation since March 2001.

On November 8, the English-language Turkish magazine, T-Vine, wrote: “Shocked to see on Twitter  that the Yunus Emre Enstitüsü – Turkish Cultural Centre London has been attacked & vandalised. Our thoughts are with the staff there. Hope the police catch the culprits quickly :-((“.

On Twitter, Enes Bayraki claimed the vandalism was carried out by PKK supporters.

All over Europe PKK militants attacking Turkish missions, NGOs, civilians. This is unaccaptable and should not be tolerated. pic.twitter.com/6sOjxfJfaj

A tweet directed at Bayraki read: “Next time we will do much worse, we are coming after all turkish interests in the world, no turk is safe.”

.@EnesBayrakli Of course I utterly condemn such thuggery & I am absolutely sure U.K. police will take action.

A video appeared on Twitter claiming to show similar vandalism at the Aziziye mosque in Stoke Newington. This, however, has not been independently verified.

Update I: The Metropolitan Police are now investigating the “racially aggravated graffiti”, according to Anadolu Agency.

Update II: A witness sent us photos of the ‘PKK’ graffiti outside of the Londra Türk İslam Cemiyeti in the Newington Green area in London.