Understanding Hate Incident Patterns After the Westminster Terrorist Attack of the 22nd of March 2017. Building a Pattern of Community Resilience Against Hate – What Worked? 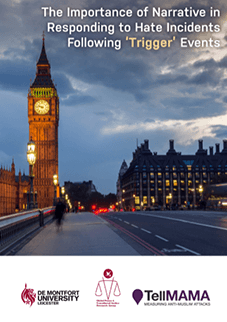 The full report can be found HERE.

How Hate Can Be Reduced After Terrorist Attacks

The overall aim of this report is to understand post ‘trigger event’ hate incident patterns with a specific focus on the anomalous data following the Westminster terror attack (22nd March 2017). In order to achieve this, the authors undertook a detailed discourse analysis for a period of 2 weeks post Westminster attack between 22nd March 2017 to 5th April 2017 (this timescale is linked to the National 14 Day Plan implemented by the Metropolitan Police). Analysis of hate incident reports provided by Tell MAMA was undertaken and semi-structured interviews were conducted with three hate crime and two journalism professionals to illicit the expert opinions of those working in this field as to why there is a difference between some trigger events and others in terms of hate incident patterns. The report concludes with a list of recommendations that have been devised following interviews with key professionals.

Speaking about the findings of the report, the Director of Tell MAMA, Iman Atta OBE said:

“This report consolidates and confirms what we know. That there are significant spikes in anti-Muslim hate and bigotry after major national terrorist events, though these can be mitigated by strong local co-ordinated community messaging that is quick, responsive and from the heart of local communities.

We know after Westminster, that this works and if we are to maintain social cohesion and reduce hate crime impacts, this report provides the first real insight into how this can be done through rapid mobilisation and positive messaging.”

Commenting on the report, the lead researcher and author of the report, Kim Sadique, said:

“This research provides support for previous anecdotal evidence regarding hate incident patterns following ‘trigger’ events such as the EU referendum or terror attacks. Analysis of the data shows clear spikes in online hate between 24-48 hours after a ‘trigger’ event and this then moves offline between 48-72 hours after. Furthermore, it shows that hate incidents are underpinned by the level of emotional connection to the ‘trigger’ event. In what we call the ‘familiar and familial’ effect, the level of empathy or connection felt towards the chosen target influences both the prevalence and severity of hate responses. The more of a connection the public has with the target location or the more they can empathise with the victims, the more likely we are to see hate spikes both online and offline after such ‘trigger’ events (700% increase in ‘street incidents’ in the seven days following the Manchester Arena attack). Westminster was different, the hate spike was not as significant as those following other trigger events. We believe this was because there were clearer counter-narratives immediately after the attack and there appeared to be less emotional attachment by the public to the target location”.

The full report can be found HERE.

The National 14-Day Plan implemented by the Metropolitan Police should be utilised by all Police Services across the UK following terrorist attacks.

The media needs to consider the use of language and images used in reporting ‘trigger events.’

Social media companies can respond much faster to posts which incite hatred by blocking/removing the posts/user more quickly.

Muslim communities should be supported to provide a clear and immediate response to potential ‘trigger events’, particularly terror attacks. Media outlets should ensure a safe platform is provided for legitimate representatives from Muslim communities to be able to speak, without fear of being vilified or collectively blamed for the actions of individuals

Research should focus particularly on feelings of connection to the event, location and/or victims in addition to patriotic sentiments more generally