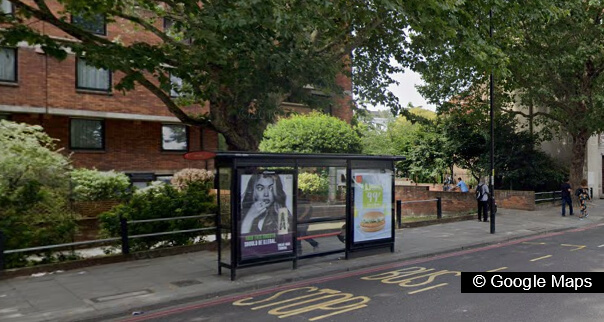 A member of the public removed a neo-Nazi sticker with their house keys after spotting it on a phone box on a residential road in south-west London today.

Speaking to Tell MAMA, the upstander, who spoke on the promise of anonymity, described how they had been rushing to catch the bus on Rochester Row when the sticker caught their eye, which caused them to stop and remove it, adding their anger at how emboldened such groups felt in spreading their racist propaganda and seeking to spread division amongst the diverse communities in the area.

The sticker reads “Close Our Borders” and promotes a fringe but rather infamous neo-Nazi group named the Pie and Mash Squad. A group which years ago, arose from the far-right English football hooligan scene and over the subsequent years morphed into a white supremacist group, which uses Telegram to spread violent and harmful neo-Nazi propaganda, and along with other far-right and neo-Nazi groups in the targeting of refugees, Muslims, and other minorities.

Those affiliated with the Pie and Mash Squad also joined with other far-right groups and neo-Nazis to blockade roads during anti-refugee protests in Dover last month.

After a fan had made the football club Everton aware of similar stickers appearing outside of Goodison Park, the club condemned the stickers and confirmed that it would be working to remove them and ensuring that staff are vigilant to their potential presence. Local MPs and the Mayor of Liverpool also condemned the far-right and neo-Nazi stickers, after they also appeared near Anfield, home of Liverpool FC earlier this year.

Back in 2016, Tell MAMA highlighted how a flag of this group appeared at a far-right anti-mosque rally in Bolton in November, alongside members of the neo-Nazi group National Action, who, just weeks later, would become the first far-right and neo-Nazi terrorist organisation proscribed under the Terrorism Act 2000.

Months prior, the threat of public agitations from the Pie and Mash Squad and the South Coast Resistance caused the cancellation of a public celebration of Eid in Southampton in July 2016.

Shere Sattar, chairman of the British Bangladesh Cultural Academy, who organised the event, said at the time: “We have considered the political situation and unrest in UK after leaving the EU, the rise of racist activity and comments around other cities around the country, and Pie and Mash deciding to visit Southampton.”

Tell MAMA has made the Metropolitan Police aware of the sticker.