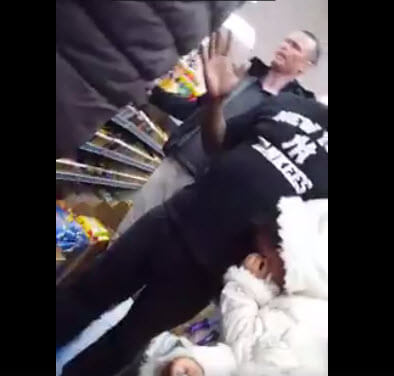 The following video – posted by a Muslim female named Umm Aqsa, once again shows a male questioning why a female chooses to wear the abaya and the Niqab (face veil). The video highlights how a simple trip for shopping turns into a tirade about the identity and clothing of the Muslim female.

We have said before that anti-Muslim bigotry crosses race and religions. In this instance, the perpetrator is a black male and can be seen in the video. We have also listed the comments of Umm Aqsa underneath the video to highlight her thoughts, but we must also add that she subsequently has received lots of positive messages from the public supporting her and this needs to be highlighted. When we highlight such issues, it is important to remember that there are lots of people who reject such bigotry and lots who believe that Muslims are fellow citizens. This is always important to remember.

I can not believe what I had to endure today. Honestly couldn’t believe it. Thank you to the uncle and brother who came in and had a go at the man.

I was minding my own business so I had to pop into the shop down in Shepherds Bush to grab something. As I entered, this guy who I’ve seen around the area decided to call me ‘ batman’ he even sang the theme tune to his little girls and told them to guess if I’m a man or a women. He told his girls that people like me don’t speak English etc.
I tried to hold it all in but I couldn’t after everything he was saying. I told him he is ignorant and that his kids will be ignorant also if he doesn’t change his way and attitude . He kept going on so i decided to record him and he was aware of this. How ironic he called me ISIS
Please keep in mind his daughters are scared and crying! !

Respect to the uncle and brother who stepped in.

Anyways long story short I left the shop and entered another shop next door to pick up my mum’s stuff and my friend rang me. Whilst I am explaining what happened a lady in that shop was listening to my conversation and she told me that he’s a foolish man to have said that. I hanged up on my friend and decided to speak to her further . Honestly as much as she also had his mentality and thinks that all women wearing ‘that’ (niqab) don’t speak English or don’t want to interact with others, she was open-minded and listened to what I had to say. She understood and we had a grown up conversation and she was very surprised how the niqab was my choice and how I speak English etc . Even though that made me laugh she said something so stupid. She told me she gets scared when she gets on a train and sees a man with a beard. Lol I laughed and told her does she get even more scared if he’s a Muslim man and it’s not the beard she’s cared of. Come on let’s be real beards are in fashion. What she was saying was mind-boggling.
I mean she said something that made me think. She said how ISIS is winning and turning us against each other ‘ us and them mentality’ she said that’s sad and I agree but at the same time what she was saying was horrific even though she said it so nicely lol.

Boy I had an eventful end to my day. Off to have a nice hot cuppa herbal tea