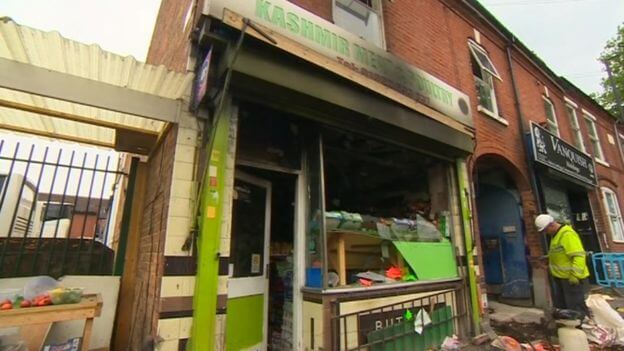 An arson attack at a halal butchers has left a family searching for answers.

On June 28, at about 5:20pm, fire ravaged the Kashmir Meat & Poultry shop in Pleck, Walsall. A relative contacted Tell MAMA for support and to share this story.

Minutes before the attack, the suspect had allegedly peered into the shop.

The first bottle spread flammable liquid over stock and hit the arm of a man in the shop. Within minutes, the store was alight. Owner Jamal Hussain put out the fire on the man’s arm with his bare hands.

Mr Hussain later confirmed to the Birmingham Mail that backroom staff had noticed the man had a petrol bomb. This allowed them time to call the fire brigade and safely leave the building.

In a statement to Tell MAMA, Mr Hussain said the fire was the ‘worst day of his life’ because it has ruined his livelihood. He worries that the person is still out there. Ramadan is usually a busy month for the business but it left him empty handed by Eid.

“Everything is totally finished and I’m in a state of utter shock and disbelief and my mind is totally unsettled,” he said.

For Mr Hussain, the Kashmir Meat & Poultry shop was not just a business, it was the main source of income to support his children.

There were hints of frustration with the progress of the police investigation. But West Midlands Police have assured Tell MAMA that they are treating the incident as extremely serious and investigations remain ongoing.

Contrary to online speculation, the building was not insured. The paperwork was hours from being finalised, according to a family source.

Others have responded to the devastating fire with acts of solidarity. Helena Dunnett-Orridge setup a crowdfunding page in support. In nine days, the page has raised £1,041. The page hopes to contribute towards lost earnings and repairs. A stated aim of the page reads:

“We need to come together as a community and stand in solidarity with the victims of this attack, who were a part of our thriving Muslim community. We will not stand for these personalised crimes of terror, whatever their motivation.”

Walsall South MP Valerie Vaz has been in touch with the family to offer her support. Some locals have connected the arson to the post-Brexit backlash, others have not.

On July 1, West Midlands Police released CCTV footage of the suspect. According to Detective Inspector Greg Evans, a ‘positive line of enquiry’ suggests it was not a hate crime, yet investigators remain open-minded about the motive. The suspect is understood to be a white male  who wore a distinctive two-tone blue jacket.

Anyone with information is asked to call the Violent Crime Team at Wednesfield police station on the 101 number or Crimestoppers anonymously on 0800 555111.