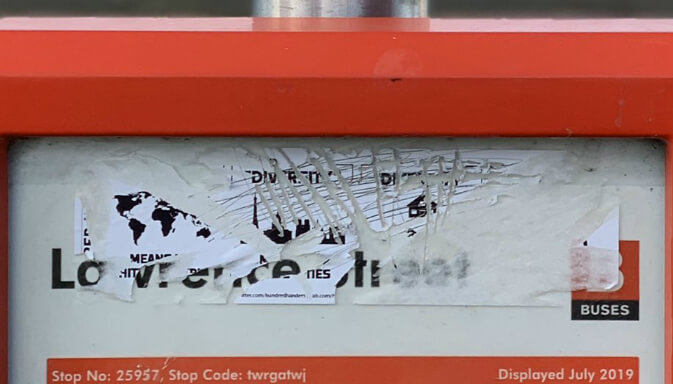 A white supremacist sticker which appeared on a bus stop in Sunderland over the weekend has been scratched off by angry locals.

Tell MAMA was made aware of the incident on Twitter by various anti-racist campaigners, including Sunderland Unites, but the sticker removal was carried out by Sunderland Lads & Lasses Against Fascism, who condemned the group responsible, adding, “This city is a port built with the toil, sweat, tears, and often the lives, of immigrants of all colours and creeds”.

The sticker, which promotes the conspiracy of white genocide, is linked to an online autonomous group that encourages users to print and distribute their stickers.

Before and after removal. Credit: @SunderlandUnite/Twitter.

The Hundred Handers group originates in the UK, having first appeared on social media in May 2018 but the first evidence of activity appeared weeks later when photographs of two “Free Tommy” stickers appeared in unspecified locations in the UK.

For supporters, a favourite sticker is “It’s Okay To Be White”, which as the anti-Defamation League identifies, is a white supremacist slogan which pre-dates 4chan trolls and internet cultures.

Other stickers promote antisemitic and anti-Muslim narratives and conspiracies, including calling for the banning of halal and kosher slaughter, promoting the white supremacist conspiracy of the Kalergi Plan, and using a QR code to link people to the white nationalist hate site Red Ice TV.

Examples seen by Tell MAMA include broader anti-Muslim and Islamophobic narratives which link Muslims more broadly to rape and criminality.

The Hundred Handers borrow imagery from a poster designed by the Dutch Nazi propagandist Cornelius (Kees) Koekkoek (1903-1982), son of the famed painter Marinus Adrianus Koekkoek (1873-1944), promoting the Dutch Labour Front (Nederlandsch Arbeidsfront), a group created by Arthur Seyss-Inquart, an Austrian politician appointed as the Reich Commissioner for the Occupied Netherlands territory in 1940, which attracted around 200,000 members and excluded Jewish people.

In his capacity as Reich Commissioner, Seyss-Inquart oversaw the deportation of 120,000 of the country’s 140,000 Jewish community to Auschwitz, following a series of discriminatory policies, and forcing them to reside in Ghettos. His use of terror, extortion, and forced labour were part of his indictment for crimes against peace, war crimes, and crimes against humanity, of which he was executed for in 1946, following the Nuremberg trials.

For his part, Cornelis Koekkoek was found guilty of being a member National Socialist Movement in the Netherlands (NSB), following the end of the Second World War which resulted in fines, internment for 17 months, and a period of surveillance.

This particular propaganda image created by Koekkoek has featured in the propaganda of more notorious neo-Nazi and white supremacist groups globally in recent years.

Stickers attributed to the Hundred Handers have appeared in cities and towns in England, Scotland, Northern Ireland, and parts of the United States,which includes coopting the branding of Extinction Rebellion to make racist statements which the campaign group condemned on social media.

As with reporting racist graffiti, members of the public can report illegal flyposting through their local council, which is searchable through the Gov.uk website. Others have produced resources for local authorities in Scotland and Northern Ireland.

The police can be contacted through the 101 non-emergency telephone number or reported online through True Vision.