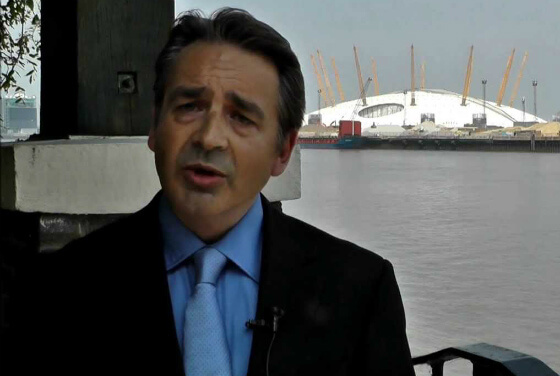 At a Bedfordshire pub, the UK branch of Pegida announced a new leadership structure, following its disastrous relaunch in late 2015.

He stood in the 2010 General Election for Ukip and achieved just 664 votes in the Cities Of London & Westminster constituency. In a 2010 interview, Weston warned that immigration results in the “ethnic cleansing of the English”. And that a civil war could occur in the next ’20 years’.

Apocalyptic and self-victimisation narratives continue to pervade his ideology and writings.

Following the murder of Lee Rigby in May 2013, Weston warned that ‘we are losing a racial war, we are losing a cultural war‘. He claimed that you would find ‘no white people in Tower Hamlets’ due to rising demographics of non-whites and Muslims.

In response to accusations of racism, Weston responded “If I want to avoid a civil war happening in my country, I am prepared to accept being called a racist“.

Weston quit Ukip after Lord Pearson stood down as leader. For him, the party would take a soft line towards Islam under Nigel Farage. He wrote in 2012 that “I think Islam will cause even more death and destruction in Europe over the 21st century than Nazism and Communism caused over the 20th century”.

Ukip, however, are happy to exploit anti-Islam sentiments when politically expedient.

Weston took on the chairmanship of the British Freedom Party (BFP) in 2011. A year later and the party announced an alliance with the English Defence League (EDL). The EDL’s founder and ex-leader, Tommy Robinson, and his cousin, Kevin Carroll, joined the leadership structure.

In the 2012 Local Elections the BFP stood six candidates (five in Liverpool and one in Basildon) with derisive results.

Weston left the BFP before it dissolved. He launched Liberty GB in 2013. The foundations of Liberty GB are contingent on cultural nationalism and anti-Islam sentiments.

In 2014, police arrested Mr Weston after quoting from Churchill’s book The River War. In truth, the arrest had more to do with a failure to follow a dispersal order, and charges were later dropped.

Nor is Mr Weston a stranger to Pegida. He spoke at their Newcastle rally in March 2015; where he went on to compare the Prophet Muhammad to the ISIS extremist Mohammed Emwazi. A year earlier, his speaking engagements included EDL rallies.

A discussion of Pegida’s new leadership is not complete without reference to Anne Marie Waters. She chairs an organisation called Sharia Watch. In May of last year, Ms Waters invited Tommy Robinson to speak at the launch of Voice UK – Victims of Islamic Cultural Extremism.

In the past she has contributed to Lars Hedegaard’s counter-jihad website Dispatch International. And shared a platform with him in 2011.

Before the 2015 election, a Daily Mirror sting exposed her anti-Islamic views during a Mothers Against Radical Islam And Sharia (MARIAS) rally. As Ukip’s parliamentary candidate for Lewisham East she went on to gain 3,886 votes (9.1 per cent).

Waters and Weston were due to speak at the ‘Draw Mohammed’ cartoons exhibition. Amid security concerns, the event was later cancelled.

So why the change? Pegida hope to tap the wellspring of anxieties towards Islam and appeal to ‘middle England‘ and individuals put off by the violence of the EDL. Pegida affords a new platform for Tommy Robinson’s unrepentant views towards Islam – without the toxic legacy of the EDL.

Pegida’s leadership change demonstrates the insulated yet interconnected networks within counter-jihad circles. This contiguous ideology extends across Europe and North America. It creates its own online echo chambers and speaks to simplistic, binary world views.

Pegida hopes this interconnectivity will come to fruition with simultaneous protests across Europe on February 6.