Who’s behind the latest threatening hate mail to mosques? 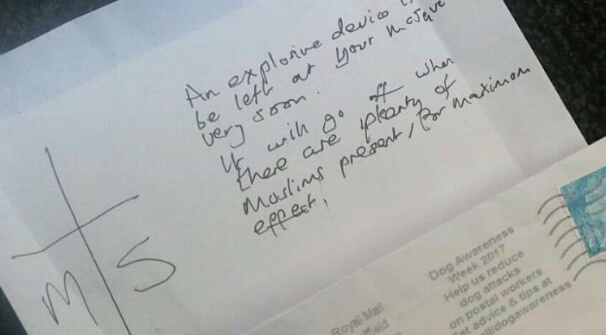 Several mosques in London have been sent hand-written threats in the post.

The text of the letter sent to Forest Gate Mosque claims that an ‘explosive device’ will be left at the mosque ‘soon’. Adding, that it intends to target worshippers during prayer times.

In East London, a mosque received a letter with the threat: “I am coming to your mosque in August to make you vermin pay”. It then alludes the ‘taste’ of Muslim blood and depicts a crudely drawn skull and crossbones.

A third letter, sent to a different mosque in East London, threatens violence in an event it calls the ‘Great cleanse of London’.

Two of the letters also features a cross and the letters ‘M’ and ‘S’. This may seek to invoke the Crusades, but this has yet to be verified.

What also connects two of the letters is its point of origin. In photos seen by Tell MAMA staff, the letters came from the Sheffield area. Both sent with second class stamps. All within the past few days or weeks. For example, the letter sent to the mosque in Forest Gate was stamped by Royal Mail’s Sheffield Mail Centre on July 3.

This latest campaign of hate could be connected to the threatening letters sent to mosques across the United States last March and February.

Again, we see second class stamps, and the style of handwriting is not too dissimilar, from the letter sent a New Jersey mosque. Both were sent from the Sheffield area.

A handwriting comparison of hate mail sent to mosques in New Jersey and Forest Gate, London.

The text of that letter read: “You and your filthy kind will be beheaded,” and featured a crude cartoon captioned “MUSLIM SLAYER.”

On February 28, 2017, the Dar Al-Hijrah Islamic Center in Falls Church, Virginia, received a letter with a crude image of a pig defecating on the mosque, the text below reads “Kill All Muslims”. As with other letters, it was sent with two first class stamps from the Sheffield area.

Two mosques in Maryland received threatening notes that read: “I will pay $100 to charity for every Muslim slaughtered” on February 28. The text ‘Muslim Slayer’ appeared on the hilt of the sword.

On March 7, 2017, a spokesperson for the North East Counter Terrorism Unit, said: “We are looking into the possibility that the communication is linked to a number of suspicious packages and malicious communications reported at locations in London, South Yorkshire, and America.”

It may or may not have been connected to a hate letter sent to the Jamia mosque in Rotherham last February. Police visited the mosque on February 17, according to the BBC.

In July 2016, police explored the possibility of a far-right hate mail campaign against mosques and government institutions.

Packages containing white powder were sent to the Bank of England, the office of Lord Ahmed, and three mosques – in Leyton, Finsbury Park, and Tottenham. A government mail screening centre in Newham had also been sent a suspicious package.

The race-hate slur ‘P*ki’ appeared on the envelopes sent to the three mosques.

It was believed that some of the packages came from the Sheffield area as counter-terror police were called after suspicious packages were found in a sorting office, according to the Sunday Times.

Tell MAMA is working with police in the relevant force areas and partners to reassure communities.