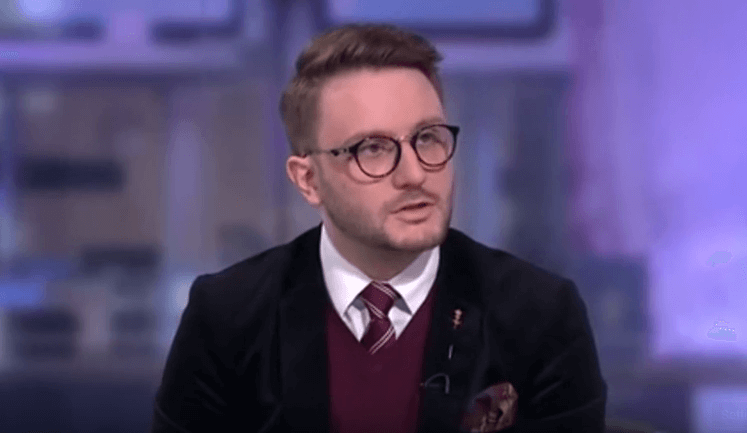 Jack Buckby, the press officer for the far-right Liberty GB party, told NUS campaigner Barbara Ntumy ‘I hope you don’t get raped’ in reference to Syrian refugees on Channel 4 News.

Both featured in a live debate about the so-called ‘alt-right’ movement last week.

Mr Buckby’s notoriety grew in 2016 after he stood in the Batley and Spen by-election, the seat of murdered Labour MP Jo Cox.

Out of respect, major parties did not put candidates forward. A bulk of the candidates who did stand, however, came from traditional far-right parties.

Tracy Brabin, the Labour candidate, was elected with more than 86 per cent of the vote. Mr Buckby received just 220 votes. But it was never about votes. It concerns exploiting the legitimacy of the political process to further an anti-Muslim agenda.

Months before the by-election, he tweeted: “Jo Cox was complicit in the rape of young girls throughout Yorkshire and beyond.”

In the Channel 4 News feature on the so-called ‘alt-right,’ Mr Buckby alludes to his time in the British National Party (BNP) but remains free to present himself as a simple ‘conservative’ who longs to be part of this ‘winning strategy’.

In the live televised debate, however, he self-defines as a ‘paleolibertarian’.

In both segments, Channel 4 failed to identify the far-right ideas at the core of Buckby’s ideology. This failure to engage with his actual politics is not the most conducive way of challenging the far-right.

Mr Buckby has also appeared in the BBC Three documentary ‘Is Britain Racist?’ – where his ideology of ‘culturalism’ was challenged by journalist Mona Chalabi.

This concept of ‘culturalism’ is borrowed from the American John Press, who rejects multiculturalism at the promotion of ‘cultural preservation’.

Missing from both discussions, however, was the fact that Mr Buckby founded the National Culturalists (NC) in 2012.

An archive of an NC blog from 2012 called for the closing down of all Islamic institutions and the banning of halal meat. It also added that social services must hold regular inspections of Muslim families to ensure they were not involved in FGM or ‘honour violence’.

In July 2012, Mr Buckby spoke at a far-right conference and admitted that the idea of ‘culturalism’ was simply the means to make nationalism palatable to young people.

In his own words: “nationalism is the cause we need to fight. The issue we’ve got is that young people do not associate with the word. So, as long as we keep the ideology it doesn’t really matter what word we use. Obviously, it’s all about spin.”

Adding, that the language of ‘culturalism,’ which is ‘already important’ to nationalism, would help get young people involved with groups like the BNP.

When a student at the University of Liverpool, Mr Buckby tweeted a poster warning against sex with ‘intravenous drug abusers’, ‘bisexuals’ and ‘blacks’.

A now-deleted tweet from 2014 read: “Today is Holocaust Remembrance Day. Please take time to remember those who were killed at the hand of fascism & hope Islam can’t do the same.”

In recent years, his incendiary rhetoric on Islam and Muslims has not changed. Further, he has made highly offensive and extreme comments about the LGBT and Jewish communities as well, yet Channel 4 gave him a platform to air such views without informing its audience effectively about his extremist ideology.

On his personal Twitter, Mr Buckby writes: “Islam is the most violent religion and political ideology on earth.” Or “I’m proud not to tolerate murder, paedophilia, rape and fascism of Islam.” He also described the prophet Muhammad as a ‘murderous prophet’.

Following the terror attacks in Orlando, he tweeted: “It’s time LGBT woke up and realised THEY are responsible for the death of 50+ people in Orlando. #OrlandoShooting.”

To promote a video where he misgenders Caitlyn Jenner, Buckby tweeted: “Trans movement is belittling what it means to be a woman”.

Regarding Jewish communities, Mr Buckby adds in the same blog: “if you’re a believer in the racial bell curve, the Ashkenazis are one of the most intelligent ethnic groups on earth”.

The well-known Bell Curve argument, debunked by virtually all social scientists, is “part of a much longer history of arguments about race and intelligence, critically rooted in early scientific racism.”

In September 2016, he recycled the falsehood that renovations to parliament would mean that MPs would be unable to drink in their leased location due to ‘Sharia Law’. A Treasury spokesperson denied this claim.

In a statement, the spokesperson added: “The buildings remain the property of the government, and the lease and associated documents explicitly state they are governed by English law.”

The matter of alcohol licensing is unresolved, but not prohibited.

Buckby’s views towards ethnic and religious minorities are highly offensive and extremely troubling. Buckby himself insists that his discourse is about ‘spin’ yet Channel 4 presenters could have more effectively challenged him by debunking his views and alerting his audience to his extremism.

In fact, Buckby is exploiting this appearance to crowdfund  from supporters in Europe and North America. It is no accident that his Twitter cover photo features Ms Ntumy’s horrified expression when she heard his inflammatory statements.