Will the UK ban anti-Islam and anti-LGBT evangelist Franklin Graham? 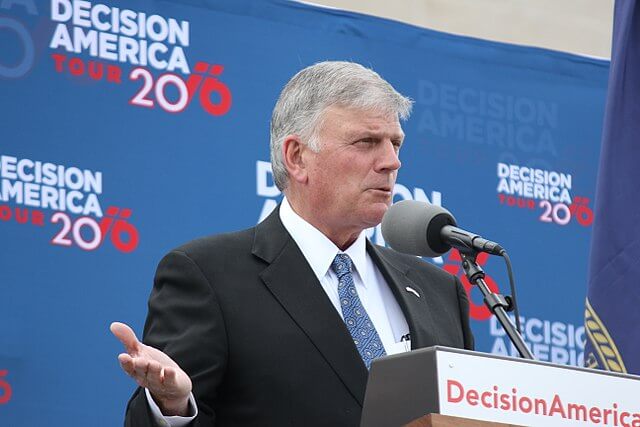 There is growing opposition to a planned visit to Blackpool next year by the leading American conservative evangelist Franklin Graham given his anti-Islam and anti-LGBT views.

Graham is a keynote speaker at the Lancashire Festival of Hope next September at Blackpool’s Winter Gardens.

A petition which calls on the home secretary to refuse Graham a visa has over 6,500 signatures. Nina Parker, a pastor at the inclusive Liberty Church in Blackpool and organiser of the petition, told the Guardian that she was ‘horrified’ that churches would invite a man with ‘this record of hate speech’. Back in June, she told the Blackpool Gazette: “This is not what we stand for in Blackpool. We don’t need somebody preaching hate.”

Franklin Graham, 65, is the son of evangelist preacher Billy Graham and is the president of the Billy Graham Evangelistic Association, and known for his work with the Samaritans Purse.

Graham is no stranger to making anti-Islam remarks. Two months after the 9/11 terror attacks, Graham declared Islam to be a ‘very evil and wicked religion.’ Following the invasion of Iraq, some expressed concerns that evangelists, including Graham’s Samaritan’s Purse, would be proselytising there. An accusation Graham denied.

His remarks about Islam being a ‘very violent’ religion in 2010 echo the statements made years earlier. The U.S. Army then withdrew an invitation for him to speak at a Pentagon prayer session in July 2010. Following the controversy, he also made disparaging remarks about Hinduism, stating, “No elephant with 100 arms can do anything for me. None of their 9,000 gods is going to lead me to salvation.”

A year later and Graham indulged the racist ‘birther’ conspiracy peddled by Donald Trump during the Obama presidency, suggesting that Obama was born outside of the United States. In broader terms, one study, published in 2014, found that increased levels of racial resentment were a key indicator of belief in birtherism.

He praised Vladimir Putin for having ‘taken a stand to protect his nation’s children from the damaging effects of any gay and lesbian agenda,’ in February 2014.

In an interview with Christian Today in December 2014, Graham declared that It Islam ‘is a religion of war’.

Franklin Graham called for a ban on Muslims entering the United States until the ‘threat with Islam has been settled’ in July 2015 following the murder of four marines in Chattanooga, Tennessee. He added, “During World War 2, we didn’t allow Japanese to immigrate to America, nor did we allow Germans. Why are we allowing Muslims now?”

Months earlier, Duke University was forced to drop its plan to broadcast the Muslim call to prayer from the bell tower of Duke Chapel, following a campaign by Franklin Graham, according to the Washington Post.

Graham repeated his calls for a ban on Muslim immigration ‘until we can properly vet them or until the war with Islam is over,’ in December 2015.

Following the London Bridge terror attack on June 3, 2017, Graham wrote on Facebook that the ‘threat of Islam is real’.

He expressed his concern that Wheaton College, an evangelical college in Illinois would not fire Professor Larycia Hawkins, who wore a hijab in solidarity with Muslims as, like Christians, Muslims are also ‘people of the book’ in a theologically-dense Facebook post on December 13, 2015. Hawkins agreed to leave the college months later and now holds tenure at the University of Virginia. Graham maintained that Islam and Christianity do not worship the same god.

Franklin Graham has used his large social media platforms to attack the so-called ‘LGBT agenda’. He wrote on Facebook that the ‘LGBT movement is trying to cram down America’s throat the lie that homosexuality is okay’. On Twitter, Graham tweeted: “The sins of our nation are great–violence, abortion, same sex marriage, pride, the list is long.”

The sins of our nation are great–violence, abortion, same sex marriage, pride, the list is long. #DecisionAmerica Tour

On gender-neutral bathrooms, Graham appeared to suggest that trans women are ‘predators and sexually perverted people’. A later statement was unambiguously transphobic. Following the conviction of Michelle Martinez, a trans woman who sexually assaulted a 10-year-old girl in a bathroom, Graham wrote that ‘Transgenderism is a sexual perversion’. The reality of the case, however, had nothing to with gender-neutral toilets or even Obama’s directive to allow transgender students to use the bathrooms of their choice in public schools – a policy later revoked by the Trump administration. A vast majority of juvenile sexual abuse victims (93 per cent) when reporting to law enforcement in the United States know their abuser. Local press confirmed that Martinez was a family friend who knew their victim before the sexual assault.

Franklin Graham has also rebuked Theresa May’s plans to reform legislation which would allow people to self-certify their gender. He wrote that the “The bill could give biological men legal access to women’s shelters, changing rooms, hospitals, and participate in women’s competitive sports,” in a wider post which attacked ‘society’s unbelievable transgender saga.’

On International Holocaust Remembrance Day, Graham tweeted: “We have another #holocaust taking place in this world today—it’s called abortion.”

We have another #holocaust taking place in this world today—it’s called abortion. https://t.co/K31gB9ePmC