‘You Are Going to Leave in a Body Bag’, Comment is Troubling 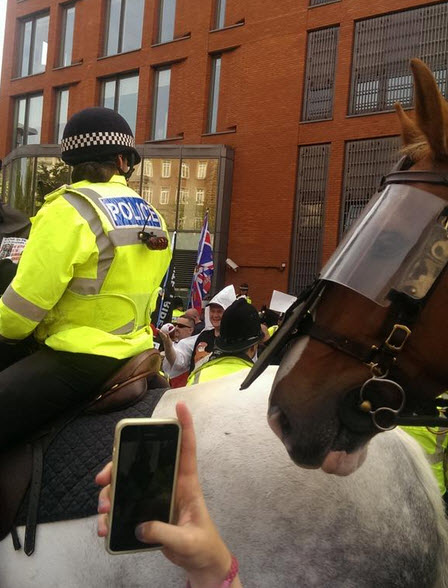 The North West Infidels, an extremist group that has taken aggressive positions towards Muslims and Islam, marched in Manchester yesterday, trying to show the public that they are a greater force than they are. In reality, this small group of mainly football hooligans, many of whom are ageing adrenaline junkies trying to reclaim the days when they would look for a ‘punch-up’ after matches, have become the poster boys for far right extremist groups.

In this video below, however, we are concerned as to the manner in which a potential threat has been dealt with. The statement was made to a Muslim female who was arguing with one of the North West Infidel demonstrators.  The woman in this video asks the individual whether he will repeat something he allegedly said to her and he seems to state that the woman filming the event will be leaving in a ‘body bag.’

We understand that police forces are sometimes issued with orders not to make arrests during demonstrations, if there is a risk that the arrest may lead to further violence. However, there are a number of issues here. The lack of action by the police even to move on the individual means that members of the public looking at this video will be puzzled as to why the individual was allowed to carry on arguing with the female with the camera. Surely some action should be taken against the individual on the basis of a breach of the peace given the context of the situation and the group involved. There also seems to be provocation that is involved in this incident.

We are aware of the person who is in the video and we will be passing this information onto Greater Manchester Police. We will also be looking to find out what action, if any, is taken against the individual in question.

However, we must also add that arguing with far right sympathisers rarely produces any change in their position and sometimes leads to more aggravation. If you are targeted because you are assumed to be Muslim, (whether verbally or physically), then do contact us. We can be contacted on 0800 456 1226 or info@tellmamauk.org.

If you suffer a serious incident, please do contact the police on 999 or 101. Finally, we would advise individuals to take pictures or videos only from a safe incident if you are looking to use the material to identify a perpetrator. Do not take such videos close to or in the proximity of the perpetrator so as to ensure your safety.