A statement on the ‘No2h8’ crowdfunding campaign 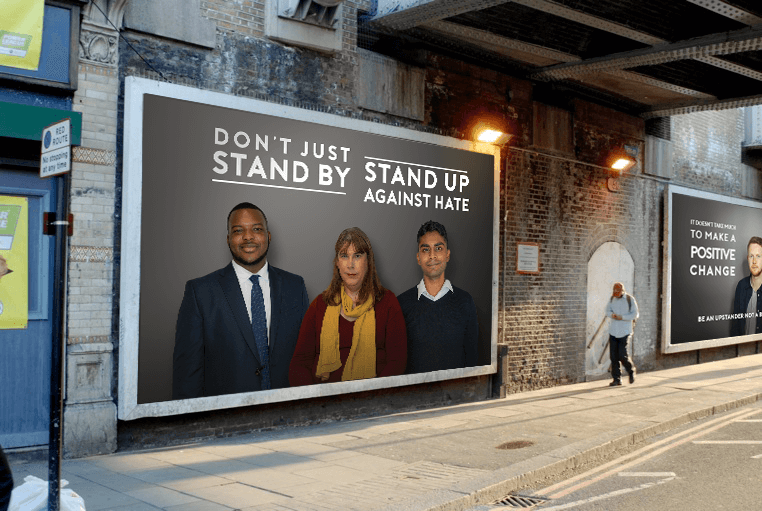 Faith Matters launched a crowdfunding campaign this month in the hope raising money for a poster campaign to raise awareness about hate crime, its impacts, and to report it. The function was to encourage individuals and witnesses to come forward to report incidents and crimes, given that all strands of hate crime (Islamophobia, antisemitism, transgender identity, sexual orientation, and disability) are equally important. It is why the campaign brought together the hate crime expertise of Galop, the CST, Tell MAMA, Trans Media Watch, and Dimensions.

The campaign aims to bring in voices of the public who come from a variety of backgrounds and identities and united in a singular message: be upstanders, not bystanders.

During the filming and production of the campaign, participants were informed of the aims of the campaign led by Faith Matters, its partners & affiliates (including Tell MAMA, Galop, the CST, Tell MAMA, Trans Media Watch, and Dimensions), before consent forms were signed. All participants signed informed consent forms from Faith Matters, which allows Faith Matters, its affiliates, partners, and agents, to use their images and/or interview statements in its publications or other media activities. No objections were raised during the filming process or after its completion.

Before the campaign went live on Crowdfunder, participants were able to view the text and images (which included the logos of all partners involved, including Tell MAMA) to ensure they were happy with the final product. At this stage, no participant had raised any objections to how the campaign, its partners & affiliates used their images or videos.

One participant then tweeted a link to crowdfunding page on November 16, with the all campaign partners tagged in (including Tell MAMA). This participant favourited a tweet from Tell MAMA, a partner in the ‘No2h8’ campaign, a day earlier.

Tell MAMA, as other partners did, shared the campaign on Facebook on November 16. Subsequent comments confirm that on November 16 and November 18 this participant was aware of Tell MAMA’s use of their image in the campaign but raised no objections (privately or publicly) until November 21.

We even thanked them publicly for sharing the campaign in a tweet on November 16, but the participant has since deleted this tweet.

Tell MAMA takes any such allegation very seriously and spoke with the production team responsible and the participant.

The production team confirmed that consent forms were signed and that participants were made aware of the partners involved. Therefore, we invite this participant to reach out to us directly, and, if requested to do so, we will remove them from the campaign. We had hoped that such concerns were raised privately first before any such tweets were made.

Nor do we accept the characterisation of our work in the participant’s tweet on November 21.

Tell MAMA has continued to challenge examples of anti-Muslim hatred and Islamophobia from politicians and members of the Conservative Party. We called for an inquiry into Islamophobia within the party following the London Mayoral election in 2016, and we have documented other examples of Islamophobia in the party, either in blogs, in meetings, or on social media. We, therefore, challenge the assertion that we have scapegoated Muslim communities when our annual reports continue to demonstrate a clear rise in Islamophobia and anti-Muslim hatred – be it in crimes, incidents, or acts of discrimination.