We called for an inquiry by the Conservatives into Anti-Muslim Prejudice in 2016, it’s now time to deliver

At Tell MAMA we have always stood against anti-Muslim hatred, Islamophobia, and racism in all its forms. A recent article suggested that our role is “to expose anti-Muslim bigotry in the Tory Party” but our remit goes beyond party politics and gives a voice to those who use our service.

Our primary duty is to support those who have experience anti-Muslim hatred, racism, bigotry, or Islamophobia, whilst acknowledging and exposing how institutional and structural forms of this prejudice manifest which can harm the aspirations and life experiences of Muslims in the UK. This has been highlighted in the successive annual reports we publish each year.

Our Ramadan message, posted in May, stated that we will continue to acknowledge the lived experiences of those who use our support service, a consistent thread which drives our work.

But we have we have also called for an inquiry into anti-Muslim prejudice within the Conservative Party before. We made this recommendation following the London mayoral election campaign on May 6, 2016. 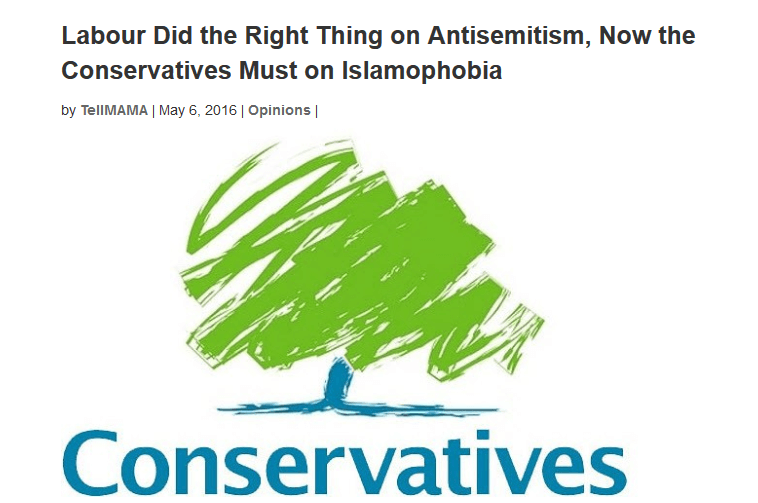 Two years later, on this same day, we called on Cllr Rosemary Carroll to be expelled from the Conservative Party if she failed to apologise for sharing a racist cartoon on Facebook.

Nor have we been afraid to criticise governmental policy – notably in 2015 when the Counter-Terrorism & Security Bill was debated in parliament. We have also raised concerns about a top-down, highly centralised implementation of the Prevent Duty. That year, we also called on the Department for Education to do more to combat anti-Muslim and racist bullying within schools.

We have also spoken out when praise is needed, as with the Hate Crime Action Plan. The government has also taken welcome steps to prevent anti-Muslim extremists from entering the UK – be it from the United States or Poland. And we praised the tightening of laws to combat social media trolling and abuse.

The news section of our website and our social media platforms have highlighted examples of where such prejudices have manifested within political parties (including the Conservative Party), and the swift action to suspend prospective candidates or councillors.

We criticised the decision to invite the anti-Muslim extremist Tapan Ghosh into parliament.

We are not reliant on government funding, contrary to reports. Several charitable trusts have recognised the quality of our work and provide us with the funds to deliver our services nationwide.

Our social media accounts have also drawn attention to this issue among politicians, peers, councillors, or prospective electoral candidates, and not just among Conservative candidates – as it extends to other political parties also.

We have spoken out and drawn attention to when Muslim politicians have been racially abused or threatened irrespective of their political affiliation.

Tackling racism and other forms of hatred requires coalition building, and we will continue with that ethos, as we also continue in our efforts to expose injustice where we find it.

Any inquiry into racism, antisemitism, or anti-Muslim hatred within any mainstream political party should be encouraged, and the government should embrace the chance to reassure Muslim communities that anti-Muslim prejudice is not welcome in the Conservative Party.