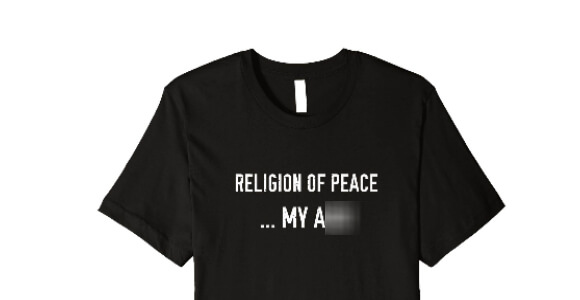 The online retail giant Amazon has “declined to comment” to Tell MAMA after members of the public raised concerns about an Islamophobic t-shirt listed for sale on the website.

The custom t-shirt has the text “Religion of Peace My Ass” printed on the front and the description claims that the product is not Islamophobic in nature, and targets all religions, despite referring to religion as a singular, not plural.

Amazon first listed the product on February 19, 2019, and is “dispatched from and sold by Amazon.” 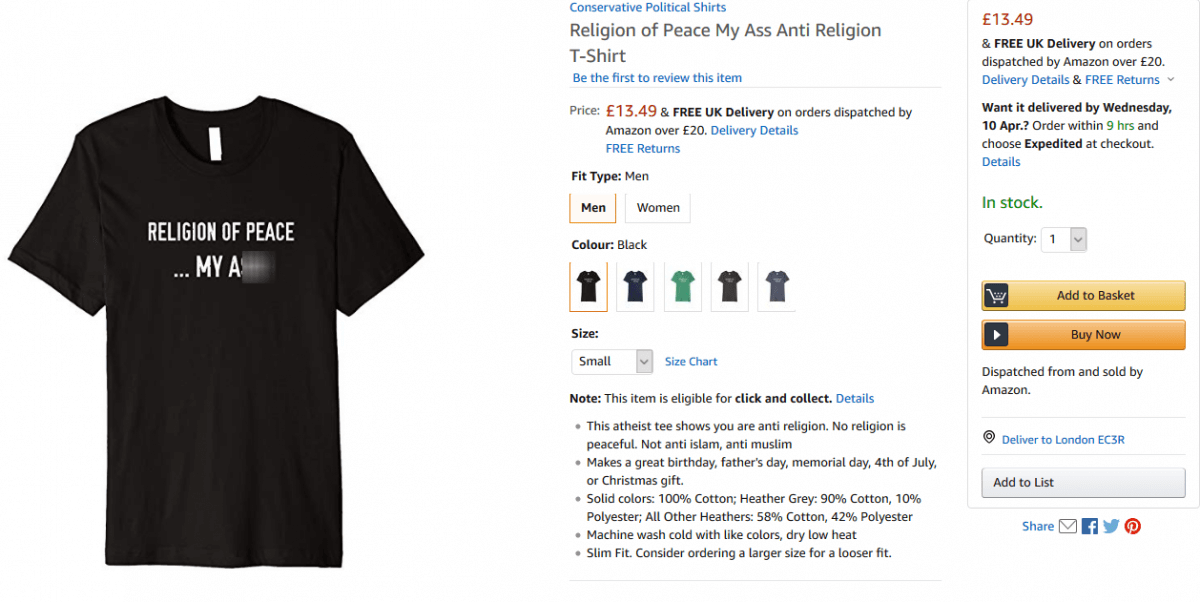 The product also appears on custom t-shirt websites in the United States and Canada.

A product listing on the website Desert Cart, however, was more explicit: listing the product as an “Anti Islam” t-shirt.

The phraseology “Religion of Peace” has appeared several times in Tell MAMA data sets, with notable examples of hateful, snarling, and ironic forms of speech occurred on social media. For example, following the Islamophobic terror attack which killed 50 Muslims in Christchurch, New Zealand, a Twitter user attempted to blame Muslims for the tragedy, “NZ was an answer to the massacre of an innocent Swedish girl and the raping of so many at Rotherham by members of the Religion of Peace.” Twitter removed this content following a report from Tell MAMA.

In more liberal spaces, however, the phraseology of this term finds acceptance in mainstream circles. Richard Dawkins, the famed evolutionary biologist, author, and atheist, is one such example of this. Between 2012 and 2015, he tweeted the phrase “Religion of Peace” fourteen times. The final example was of an image taken from a protest against the Islamophobic film “The Innocence of Muslims” which took place in Kolkata, India in October 2012, but Dawkins tweet captioned the decontextualised image: “Good to see young children taught the religion of peace. And look at those little faces, shining with sincerity” on July 22, 2015. This tweet alone gained over one thousand retweets.

Despite the degrees of difference in language, both examples are guilty of perpetuating harmful and dehumanising stereotypes about Islam and Muslims, with the latter gaining far more mainstream credence.

Nor are algorithms immune from such problems, as searches for terms like ‘Sharia’ took Google users to websites like thereligionofpeace.com, which purport to be neutral sources of information, but promote anti-Muslim conspiracy theories like ‘taqiyya’.

Amazon prohibits the sale of items “that promote or glorify hatred, violence, racial, sexual or religious intolerance” and reserves the right to remove such items from sale. Hence why Stephen Yaxley-Lennon (aka Tommy Robinson) has his co-authored book on Islam removed from sale.

The company has removed other examples of Islamophobic items, but when Tell MAMA cited the above policy in its correspondence, Amazon’s press office declined to comment.