Appeal after Muslim woman assaulted and had her hijab pulled

The Metropolitan Police are appealing for witnesses to come forward after a woman repeatedly assaulted a Muslim teenager and attempted to rip off her hijab in an Islamophobic attack in east London.

The incident occurred at around 14:55 GMT on October 3 at a branch of McDonald’s on Bethnal Green Road, where three Muslim teenagers, all Asian and aged 18, were racially abused by an unknown woman.

This unknown woman then continued to abuse the teens and followed them to the junction of Roman Road and Victoria Park Square where she spat on one of them.

The perpetrator then grabbed one of the teenagers by her hijab and hair, hitting her on the back of the neck on three occasions.

The teenagers were able to escape and went straight to a police station to report the assault and abuse.

The suspect is described as a black woman, aged around 40-years-old, who wore gold hooped earrings and a black coat.

Detective Constable Anton Arulnayagam, of Central East Command, said: “This was a distressing incident, which is believed to have been racially motivated.

“We believe the assault was witnessed by a man in his 20s, who attempted to intervene. Officers would like to speak with this man or any other witnesses.”

In 2017, Tell MAMA verified 149 reports (18 per cent) of physical attacks, a 24 per cent rise in reports from the previous year. In the most recent reporting year, 17 per cent of perpetrators were verified by Tell MAMA as being female.

Detectives investigating an Islamophobic assault in Bethnal Green have released CCTV stills of a woman they want to trace. 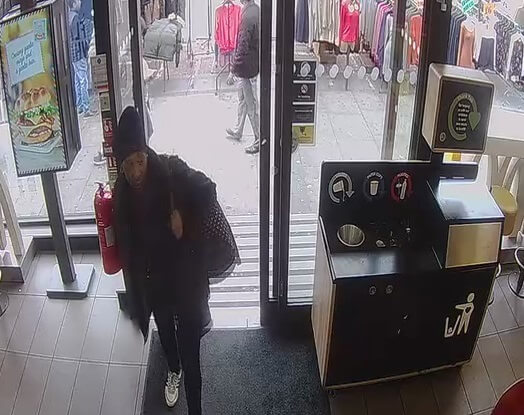