Brenton Tarrant: How the media helped turn the ‘shitposting’ terrorist into a meme 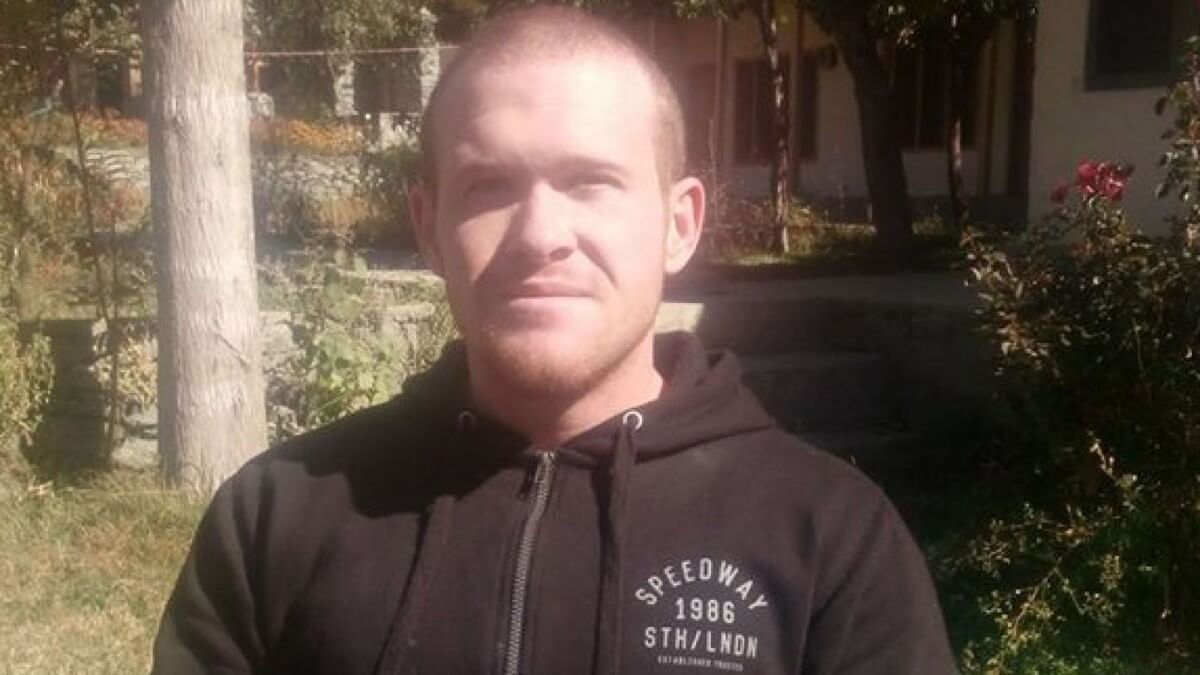 In the search for answers following the terroristic murder of 49 Muslims at two mosques in Christchurch, New Zealand, we have the manifesto of 28-year-old Australian national Brenton Tarrant.

This manifesto, like the decision to live stream his murderous rampage, were stepped in dark internet culture, a composition of memes drenched in the stench of ‘shitposting’.

Mr Tarrant, for example, did not learn about ethnonationalism through the video game Spyro 3. Nor did he learn to kill by playing the video game Fortnite. It’s possible that this reference is a simple act of ‘shitposting’ but may also reflect how another far-right terrorist, Anders Breivik, cited as an inspiration by Tarrant, claimed that Call of Duty, another popular video game franchise, improved his proficiency with firearms. Tarrant boats of receiving a ‘blessing’ from Breivik to carry out the attack.

Minutes before the massacre began, a post attributed to Brenton Tarrant, on 8chan began: “Well lads, it’s time to stop shitposting and time to make a real life effort post.” He added: “I have provided links to my my writings below, please do your part by spreading my message, making memes and shitposting as you usually do.”

The image choice is no accident either. It references the long-standing meme that Australians are more responsible for shitposting due to the difference in time zone, according to Know Your Meme.

Brenton Tarrant wanted to become a meme, to transcend beyond his own’ shitposting’, and ethnonationalist and Islamophobic views. Sections of the British media, however, helped further this desire by turning sections of his live stream into a GIF, a decision which went against the advice of the New Zealand police. The MailOnline even uploaded Tarrant’s entire manifesto for its readers to access.

Such actions demonstrate a deeper sense of self-awareness, by inserting other examples of ‘shitposting’ in his manifesto, like the Navy Seal Copypasta, Tarrant hopes to catch the media off-guard and to keep himself relevant in the ever-changing news cycle, by alluding to popular culture and individuals like PewDiePie and Candace Owens. With the latter, he adds: “The extreme actions she calls for are too much, even for my tastes.” A clearer example if any of his ‘shitposting’ to keep his actions and manifesto in the public eye.

But his ‘shitposting’ has a deeper and sinister intent: to draw others into the actual propaganda, from his ethnonationalist screeds to outright Islamophobic conspiracies of Islamisation, demographics, and the white supremacist myth of the “Great Removal”. The ideological inconsistencies speak of the neo-fascist ‘ third-way’ positions and heap praise on Anders Breivik and Oswald Mosley.

On Facebook, he uploaded a video of the widely debunked video on Muslim demographics and a clip from the television show Ugly Americans where the koala character Doug sets fire to a building, which has been a popular meme since 2013.

Cyrillic, Armenian and Georgian references to historical figures and events; and the phrase: “Here’s Your Migration Compact” appeared on one of the weapons.

Archives of his social media accounts include a plethora of examples of Tarrant using mainstream news sources to scaremonger over demographics and link Muslims more broadly to crimes like child sexual exploitation, with several references to high-profile trials in the UK and Finland, including the slogan “For Rotherham” which appeared on his gun. On Facebook, an article from the Daily Express concerning ‘Asian grooming gangs’ was shared.

Tell MAMA, has, for years now, documented how the far-right have continued to exploit high-profile criminal CSE convictions to push a divisive narrative about Muslims more broadly. Full Fact, a non-partisan fact-checking charity, reported in September 2017, that the government had not updated data on convictions for sexual offences since 2014, data which found that 81 per cent (where ethnicity data was available) of people convicted for such offences were white, 7 per cent were black and 9 per cent were Asian.

Videos shared on his Facebook included neo-Nazi propaganda which praised Oswald Mosley, with one such video, created by the Youtuber ‘You Kipper’ having almost two-hundred-thousand views.

Tarrant shared memes about the Oklahoma bomber Timothy McVeigh. He also shared a meme which promoted the burning of a mosque. Both appeared on his timeline on March 12.

Like Alexandre Bissonnette, Tarrant swam through similar echo chambers. It’s no accident that Bissonnette’s name appears on one of his weapons.

Consistent with far-right/radical right parties, Islamophobic ideologues/groups, and neo-Nazis is Tarrant’s ideological and selective reading of European history. For example, a meme celebrating the murder of Muslim men, women, and children featuring Vlad III, Prince of Wallachia (aka Vlad the Impaler or Vlad Tepes), was shared on Tarrant’s Facebook. Academics argue that such imagery and language appeals to a chauvinistic form of identity politics which taps into ‘group-specific collective memories’ that are always hinted at and occasionally directly addressed. Anders Breivik, in his 760-page manifesto, envisioned creating a weapon to murder Muslims which was named after Tepes. 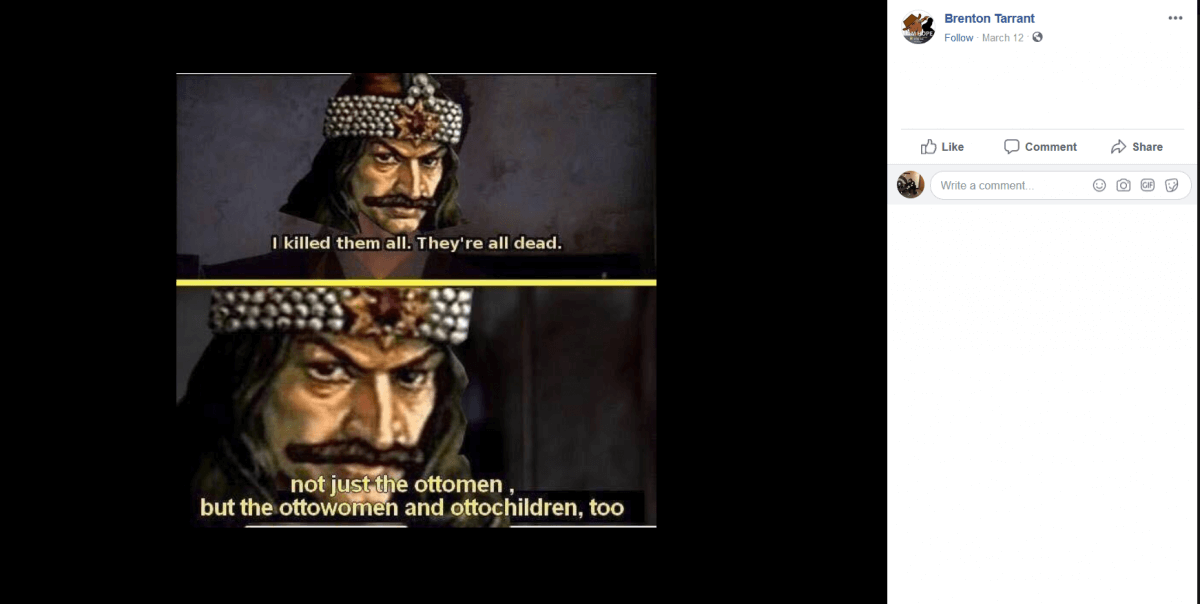 Music was also an important part of this terror attack, as the audio which played at the start of the live stream derives from a propaganda tribute to Radovan Karadžić, the Serbian general and convicted war criminal, who was responsible for the genocide of Muslims in Srebrenica in 1998. The ‘Serbia Strong’ video, known colloquially as ‘Stop Kebab’ has circulated on YouTube since at least 2008. A reference to ‘stopping kebabs’ appeared in his manifesto and on his gun. Other songs include the Initial D track ‘Gas Gas Gas’ and the remix “Grün ist Ünser Fallschirm” or Waffen SS Choir, an audiotrack popular among fascists on YouTube and Soundcloud.

He called on others to murder the Muslim Mayor of London Sadiq Khan and even made reference to the Finsbury Park terrorist Darren Osborne, spelt as Darren Osbourne.

As experts on far-right extremism in Australia have pointed out, the Australian Senate almost voted in favour of a bill which echoed far-right narratives about ‘anti-white racism’ last November.

His manifesto ends with the chilling reflection: “Do you feel any remorse for the attack”? the author asks self-referentially in the manifesto. “No. I only wish I could have killed more invaders, and more traitors as well.”

This act of Islamophobic terrorism was pre-planned for months, driven by a racist and hateful ideology, yet sections of the British press referred to him as a “smiling tot” and a “blond little boy”, which further demonstrate the need for such press to reflect on how terrorism against Muslims and other minorities from white perpetrators is framed. As Dr H.A. Hellyer tweeted: “I am losing count of the number of condemnations of this terrorist attack in #NewZealandMosqueShooting that fail to mention the words “mosque” and “Muslim”. For goodness sakes: they were killed for being *Muslim*. Name it. Don’t pander to the far-right that led to this outrage.”