Fact check: Are there three million Muslims in England? 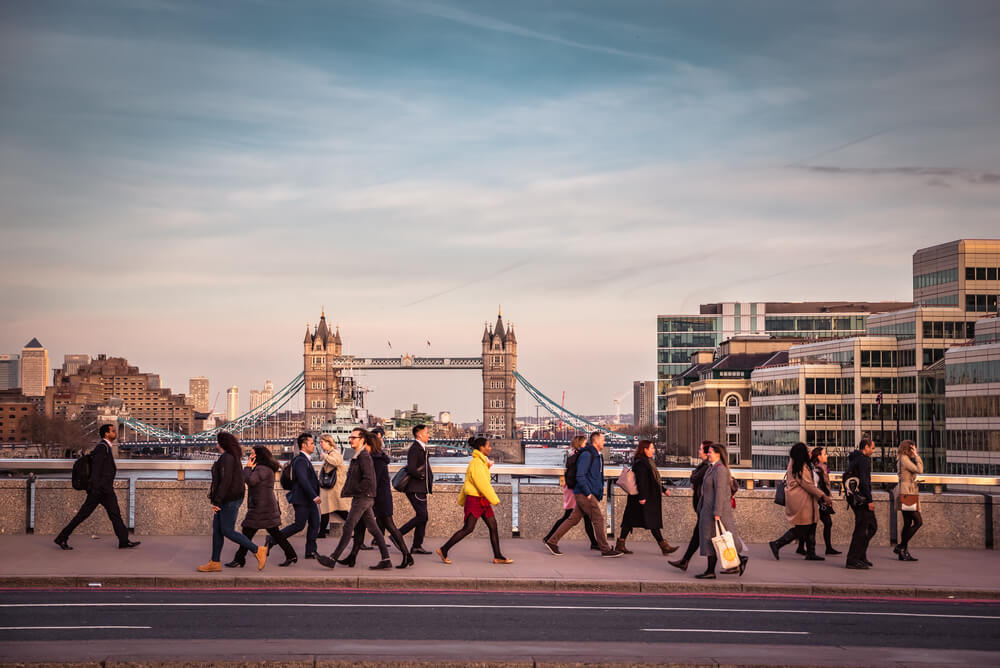 Two viral news articles, published in major British tabloids, last week made a bold claim: that the Muslim population in England had risen above three million.

But a Tell MAMA analysis of these claims raises more questions about their choice of datasets and how crucial methodological considerations were overlooked or understated, repeating a pattern identified in near-identical coverage in January 2016.

But to return to the most recent claim, published in the MailOnline on January 3, which contained the headline, “Muslim population of England passes the three million mark for the first time as the numbers of Christians continues to decline, figures reveal”. 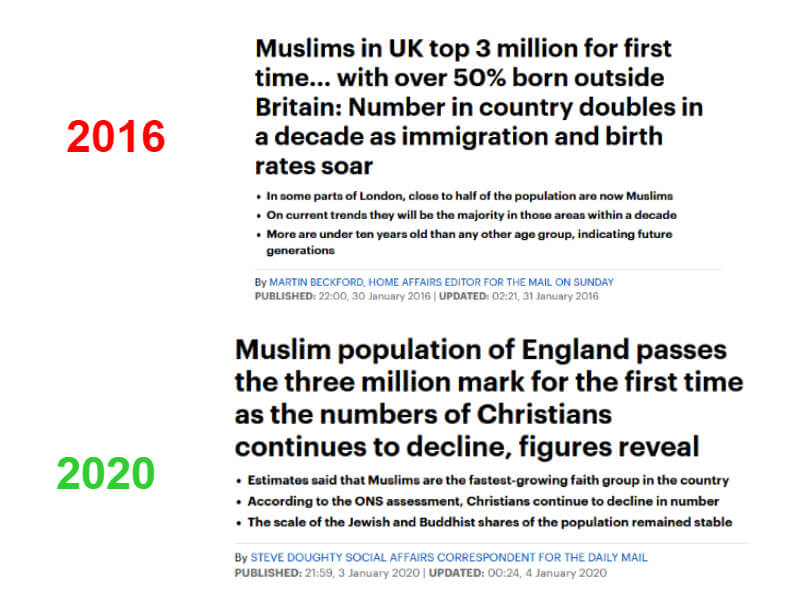 The story draws from a research report on population estimates on ethnicity and religion, published by the Office for National Statistics (ONS) on December 9, 2019. Data in this report drew from the 2011 Census, mid-year population estimates, and data from the Annual Population Survey (APS).

The use of APS data in this report, however, comes with an important caveat, not reflected in the MailOnline analysis – namely, that pooled data sets make for interpreting time-series data more difficult due to two overlapping years of data.

This reliance on APS data means that the report features fewer ethnic and religious groups than the 2011 Census.

The report offers other caveats and cautions about the size of unavailable, inconsistent, and zero estimate data sets for many minority faith groups, with a majority of local or unitary authorities, notably in rural areas (as with ethnicity), unable to produce detailed breakdowns of religion, outside of Christianity and the ‘no religion/not stated’ combined group.

The MailOnline article relies upon this data to show a rise in the number of self-identifying Muslims, those of unstated or non-belief, and other faith groups in England but excludes how the figure of Muslims in Wales, weighted against census data remained the same, though Wales is less diverse than England in terms of the distribution of faith groups.

Again, in the report’s concluding remarks, that is “an interim measure” that requires feedback, owing in part to concerns over the quality of estimates produced in local and unitary authorities, which had higher levels of completeness in data for ethnicity than religion.

Nor does the MailOnline coverage sufficiently explain to its readers, how, despite a drop in self-identifying Christian belief, some, like the 55 per cent (of almost 4,000 people polled) of those surveyed by the National Centre for Social Research the in 2018, identified in some way with a God-like figure, despite a sharp fall in Christian belief and a spike in the number of “confident atheists” peaked at 26 per cent.

A day later, on January 4, The Sun’s headline choice in comparison, focused on the diversity of Britain, adding that the population of Muslims in Britain had “smashed” the three million mark for the first time.

Again, however, this does not tell the entire story, as in January 2016, The Sun ran similar coverage to the Mail on Sunday, headlined, “Muslims in UK top 3million for first time”, the article featured alarmist sentences like “Soaring immigration and sky high birth rates have seen the number [of Muslims] in the country double in a little over a decade”. 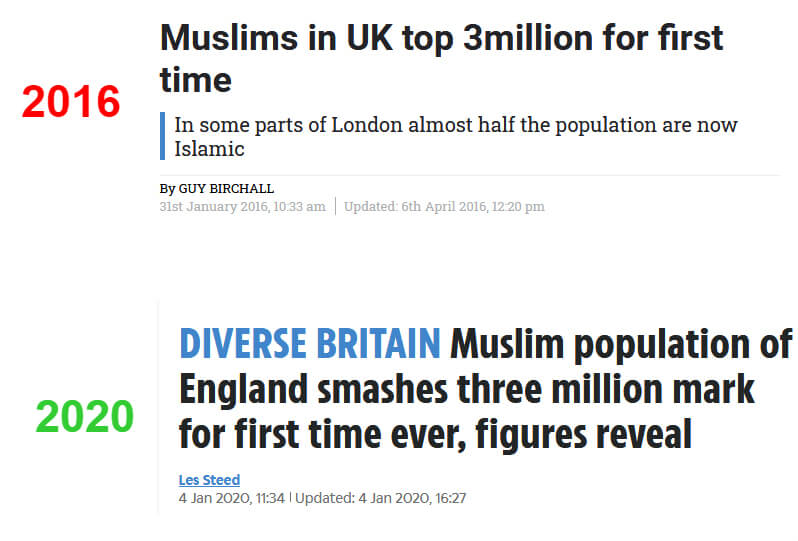 The word immigration does not appear in The Sun’s coverage published last week, however.

The source of the claim in The Sun differs from the MailOnline and derives from a user-generated request to the ONS which was published last December, titled “Religion by sex and age-group in Great Britain, 2018 to 2019”.

The ad hoc data release is “based only on APS data” and may not prove suitable for all analytical purposes, found in the metadata sheet in the Excel file.

Again, the ad hoc nature of such data requests can offer differing results. For example, the ONS published a request for data on the number of Muslims in Britain in August 2018 and provided a figure of 3,372,966 – higher than the figure quoted in The Sun’s coverage last week.

In another example, a user-generated request for data on religion by region (October 2017 to September 2018), placed the Muslim population at 3,432,444 and contained the same caveat as above.

An ad hoc analysis of APS data published in 2015 put the Muslim population at 3.1 million, as Full Fact, a non-partisan fact-checking charity, argued that census data was more reliable if an outdated measure of Muslims in Britain, in a myth-busting blog published in July 2017.

Putting methodological aside, coverage which fails to specify such caveats, whether alarmist or not in tone, is weaponised by individuals and groups who promote anti-Muslim and Islamophobic narratives and conspiracies, which at the ideological extreme, fixates on demographics change through the so-called “great replacement”, which, as the recent Tell MAMA annual report shows, has existed in various forms, and not just at the fringes of society. 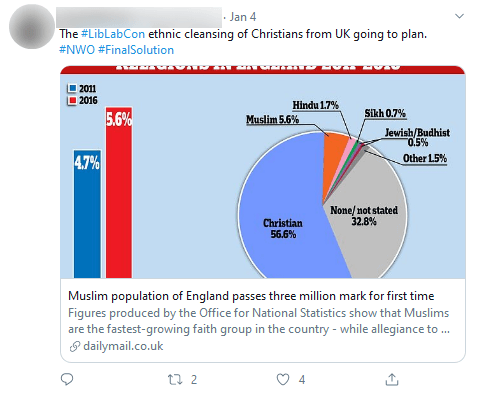 The MailOnline article even appeared on the popular US-based conservative website the Drudge Report, and shared from a fan account, boasting over three million Twitter followers.

The ONS will publish the latest census data next year and has generated controversy, both from Sikh communities, who are unable to identify as an ethnic group and for its failure to allow individuals to self-identify as black Welsh and Asian Welsh.