From Finsbury Park to medieval Spain: how the far-right misuse history 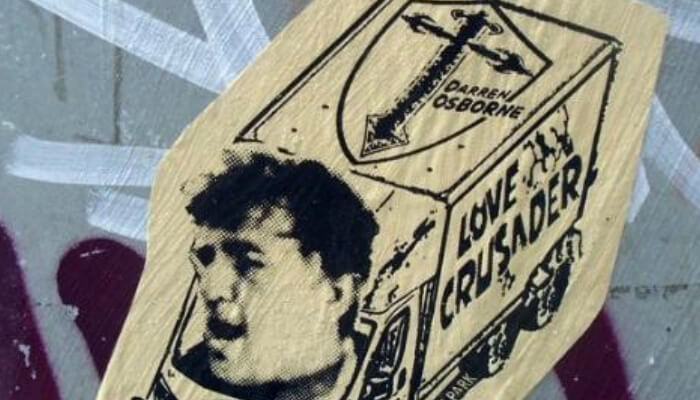 On the second anniversary of the Finsbury Park terror attack, we have reposted a section of our 2017 annual report, Beyond the Incident: Outcomes for Victims of anti-Muslim Prejudice, to highlight how the far-right misuse history, and, how some glorified this act of terror, which can fall foul of anti-terror legislation.

On the morning of June 23, a tweet depicting Mr Osborne ‘crushing’ Islam appeared online. The image juxtaposes Osborne’s name against the Cross of St James of Compostela, a reference to James the Apostle, the ‘Moorslayer’. Spanish historiography asserts that James the Apostle played a central role in the ninth-century Reconquista against Islamic Spain, which is contested by historians. Centuries later, such mythologised narratives became popular among Catholic nationalists. The Order of Santiago (Orden de Santiago), founded in twelfth-century Spain, adopted this cross, as the Knights of the Santiago, were charged with making war with Muslims. The forced expulsion of Jews by the Spanish crown in 1492 was repeated centuries later with the expulsion of 300,000 of Moriscos, Muslims who had nominally converted to Christianity after the surrender of Granada in 1492, after more than a century of discrimination and marginalisation. The mass movement of people was traumatic but resulted in little violence. It did, however, leave a deep impression in the collective memory of both faith groups. In a wider context, some historians connect this event to the conquest in Constantinople (1493) with the siege of Vienna (1683), drawing clear distinctions between how competing empires treated their religious minorities.

The shift in how Europe came to view Islam as an immutable force came from the essentialism of European thought in the late nineteenth and twentieth centuries, where old stereotypes which reframed Islam as culturally inferior centuries earlier, fused with the racial pseudo-science of the time, to justify colonial rule in Muslim-majority lands. Centuries later, the use of the cross as a symbol created fresh controversy, as a 2,000-strong Spanish brigade, deployed to Iraq in 2003, wore patches on their shoulders bearing the Cross of St James; the decision was condemned by the Spanish press as politicians avoided the issue. This emphasis on the past through a selective reading of history is a popular tactic found today among some of the most prominent populist right-wing and far-right parties in Europe. Wodak and Forchtner (2014) analysed a comic produced by the Freedom Party of Austria (FPÖ) in a 2010 election, pointing out how the party fused history with the modern by linking the Battle of Vienna (1683) with Turkey’s pursuit of EU membership. Moreover, they argue that such imagery and language appeals to a chauvinistic form of identity politics which taps into ‘group-specific collective memories’ that are always hinted at and occasionally directly addressed.

A desire to view history through this narrow interpretive lens creates, as Halbachs (1992) argues, a collective way for individuals to recall and localise their memories from wider society, for the purposes of appealing to certain demographics. Therefore, given the unconventional medium of a comic for political propaganda, it is, therefore, fair to draw some comparison of sorts with the cartoonish propaganda used to lionise Darren Osborne, which seeks to frame him within a wider historical narrative that aims to appeal to the collective memories of those drawn to wider anti-Muslim ideological networks. Moreover, individuals who lack the resilience to resist such extremist narratives may seek to justify the attack as a form of revenge or to celebrate the terrorist in question. The former sits within Levin and McDevitt’s study which found that 8% of perpetrators who commit a hate crime in situations where they believe that the ingroup is under attack by an ‘outgroup’.

Endnotes: The murder of 51-year-old Makram Ali outside of the Muslim Welfare House in Finsbury Park, London by the far-right terrorist Darren Osborne, and the attempted murder of nine others did result in several offensive tweets about Muslims, with some glorifying Osborne’s terroristic violence. Such reports, while small, appeared within hours of the attack, one tweet later removed by Twitter read “The only sympathy I have is for the van driver. #Revenge”. A far-right inspired Facebook page used the popular ‘#FinsburyPark’ hashtag to spread a meme which read “Is this the month of Ramadan or Ramavan?” on June 19. A Facebook post reported to Tell MAMA heaped praise on Mr Osborne, adding that ‘it’s about time someone started exterminating them’.

Our thoughts today are with the loved ones and friends of Makram Ali, 51, who was murdered by the far-right terrorist Darren Osborne, who ploughed a rental van into worshippers outside of the Muslim Welfare House two years ago.