Beyond the Incident: Highest Number of Annual Reports Logged by Tell MAMA Since Launch in 2012 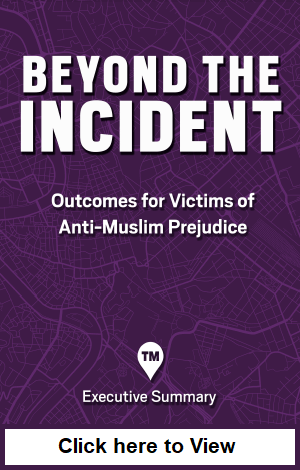 Director of Tell MAMA, Iman Atta OBE says, “we are in deeply worrying times where people are looking for certainty and what they are getting is instability at a political and societal level. This means that at times like this, minority groups are the ones who suffer the anger of those looking to vent their fears, insecurities and concerns.

“We are seeing more aggressive street-based incidents, younger perpetrators, between the ages of 13-18, increased vandalism and international interference by well organised social media accounts playing groups off in the UK. More than ever, we need to come together and redouble our efforts against those who seek to divide and play communities off against each other”.

The @SouthLoneStar account made several tweets about the terror attack on Westminster Bridge before sharing the photo of a Muslim woman walking across the bridge on a mobile phone, just after the vehicle had mown down pedestrians. It used the major hashtags (#PrayForLondon and #Westminster) to post tweets which described Islam as a ‘cult of death’ and added the #BanIslam hashtag. An earlier tweet called for Islam to be ‘outlawed’.[1] An archive of the @SouthLoneStar account in January 2017 revealed many pro-Trump tweets and how the account had followed a far-right account named @pepethetroll, which remains active on the platform.[2] Nor was the anti-Muslim content specific to the United States or even Britain. Further archive research of the account reveals that the @SouthLoneStar had attempted to stir-up anti-Muslim views in other European countries. For example, on 11 March 2017, @SouthLoneStar used the ‘#BanIslam’ and ‘#Rotterdam’ hashtags in a tweet which shared an image of about Muslim conquests and the Crusades.[3]

The Guardian reported that the @SouthLoneStar account was the “creation of the Internet Research Agency, a Russian “troll army” based in St Petersburg. This is where, in rooms of about 20 people working 12-hour shifts for pay of between 45,000 and 65,000 rubles a month (£575-£830), a modern disinformation campaign is crafted.” Whilst these are some examples of Twitter and social media accounts promoting direct anti-Muslim hatred, we need to maintain vigilance against foreign interference, in these cases, emanating from Russia, which seek to promote division and intolerance in the UK.

Where age group data was available, the most common age for victims was 26-35.

The most common age for perpetrators was 13-18.