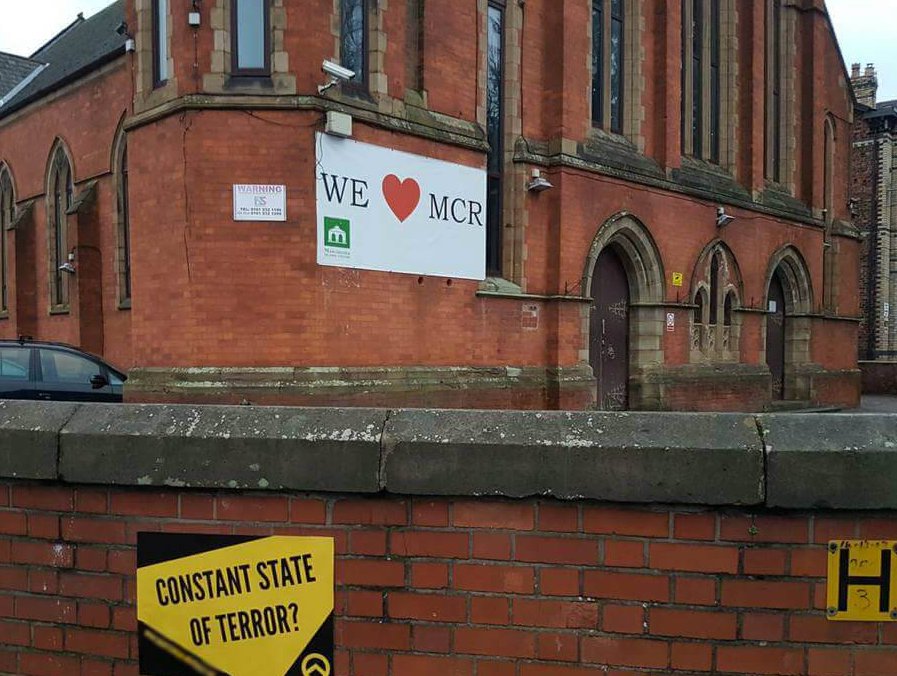 The latest recruitment efforts from the English branch of the pan-European Generation Identity movement has become a source of social media mockery.

On the morning of January 13, the @GenIdentEngland account tweeted, “Activists from Generation Identity pay a visit to the famed Didsbury mosque,” where an activist is photographed placing a sticker on the perimeter wall which reads, “Constant State of Terror?”.

This tweet, however, while drawing some support, did also encounter derision. One user replied: “What bravery. Instead of knocking on the door and talk to people about their views. You put up a poster.”

The official Twitter account of Didsbury Mosque then replied that “the quality of the poster paper was outstanding,” including a GIF of an animated sheep pointing its thumbs upwards.

We can confirm that the quality of the poster paper was outstanding. pic.twitter.com/Hf19gbJuq7

Tell MAMA has passed the incident to contacts in Greater Manchester Police to investigate.

Between May 2013 and June 2017, we documented in an infographic, 167 incidents against Islamic institutions in the UK.

See it. Report it. Get confidential support.

Our interactive incident map continues to document incidents against such incidents that have been in the public domain.

The radical right, which includes Generation Identity England, use ethnopluralism in opposition to multiculturalism and pluralism. In short, this old idea argues for segregation along ethnic and cultural lines through geographic distance, in the belief that mixing of groups will result in cultural extinction. This belief is grounded in the construction of various threats to their identity, it requires not just the ‘othering’ of Muslims and refugees, but it rejects political elites and institutions like the European Union, believing such entities are impediments to the realisation of their ethnopluralist aspirations. A key aim of ethnopluralism, as argued by other academics, is one of expulsion. Other research argues that ideas around ‘ethno-identity’ are replacing traditional concepts of nationalism in these political spaces.

Tell MAMA has highlighted other recent examples of Generation Identity stickers in other parts of the UK and Ireland.

It is, therefore, no surprise, that the first major student of Generation Identity England was to unveil a banner which promotes the conspiracy theory of ‘Islamisation’. An ITV investigation has also documented how members of this group have taken part in training camps in Europe.