How far-right fake news continues to go viral on Twitter

A viral and inflammatory falsehood about ‘Muslim-only housing’ in London exemplifies the need for Twitter to fix an enduring problem: removing content designed to deceive and pass as news.

The company has taken welcome steps to counter electoral misinformation but falls short of other platforms in allowing users to flag and report false news stories. 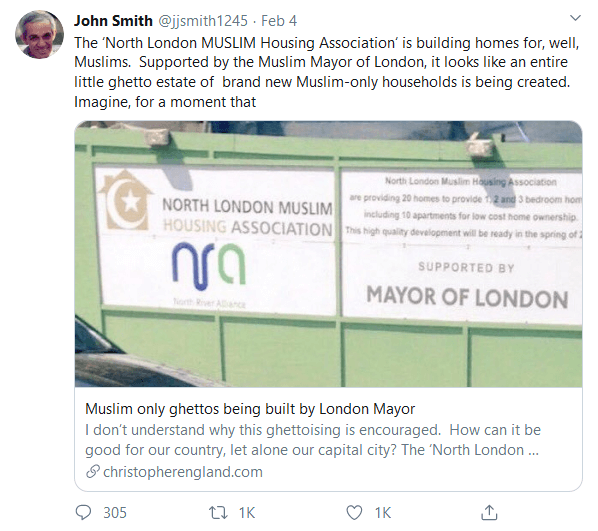 The tweet was posted at 4:36 pm GMT on February 4, by the user @jjsmith1245, claimed that: “The ‘North London MUSLIM Housing Association‘ is building homes for, well, Muslims.  Supported by the Muslim Mayor of London, it looks like an entire little ghetto estate of brand new Muslim-only households is being created.”

None of which is true, of course, as the North London Muslim Housing Association, welcomes applicants irrespective of background.

And the @jjsmith1245 account often shares far-right talking points on Twitter, including perverse anti-Muslim conspiracies such as the obscure concept of Taqiyya, which has also found mainstream credibility in the writings of the Times columnist and author Melanie Phillips.

It gained further traction when it was shared by the former Daily Express columnist and MEP Patrick O’Flynn, who tweeted that, “I’ve never got why ethnically and now religiously exclusive housing associations are permitted,” but was challenged in the replies, including from high-profile figures, including the journalist Fatima Manji and Jonathan Portes, Professor of Economics at King’s College.

The erroneous tweet, from O’Flynn however, was not deleted as instead, a further tweet acknowledged the error, confirming that the housing association does indeed accept all applicants.

I'm told by @jdportes and others that such HAs in fact are signed up to accepting tenancy applications on an equal basis from all-comers. In which case only the names are exclusive (which I don't think is a great idea but that's a separate point). https://t.co/8uqg3N8wHg

This clarification gained little traction when compared to O’Flynn’s original, erroneous tweet, which, as of writing, stands at over 230 retweets.

The original link shared by @jjsmith1245 and others directs users to a blog site called “England’s England” or “Christopher’s England”. For its obscurity, the website has published a plethora of articles steeped in conspiracist, racialised, and hateful content about Muslim and Jewish communities.

The blog cited by @jjsmith1245 first appeared online in June 2017, and, in that same month, another blog piece claimed that Muslim and Jewish communities control ‘most’ of the food chain in the UK, as both faith groups “brought with them the mentality of a return to the Stone Age”.

Years earlier, a blog post described how the notorious Holocaust denier and Nazi apologist David Irving had spent time in prison for “daring to speak freely and express himself and his views about the number of Jews killed during the Holocaust”. Other blog posts recycle the antisemitic canard about Jewish people and the media.

It claims that Islam is a “totalitarian political cult-like ideology” and speaks of “warring religion viruses, born of the inbred desert tribes of the Middle East thousands of years ago”.

One notable invective propagates ideas of resentment and victimhood politics, as it laments perceived examples of individual and social disadvantage, including, that it was legitimate, in their eyes, unfair of others to refer to him as a Brit as shorthand for British, but not to refer to someone of Pakistani background as a “P*ki”. As the previous Tell MAMA report highlighted: “A sense of victimhood underscores this intensification of emotion fuses with the power of myth-making to a broader cultural pessimism which is a feature of mainstream and more obscure far-right and radical right ideologies, and therefore, identifying the digital pathways which connect disparate far-right groups”.

In broader political terms, some academics have argued that a defining feature of the Trump campaign in 2016 was its reliance on ‘white victimised toxic masculinity’ – where segments of his supporters overlooked or disavowed their societal privileges by centring their belief of being ‘disrespected or violated by the political establishment,’ as proof of their apparent exclusion from politics.

The “Christopher England” page has its own Twitter account (@christopher_eng) where anti-Muslim and Islamophobic views are easy to find.

Nor is this the only recent example of old falsehoods gaining traction online.

Where appropriate, Tell MAMA has flagged tweets from the accounts of @christopher_eng and @jjsmith1245 for what it considers breaches of its hateful conduct policies.