On March 19, 2017, dozens, if not hundreds of residents in the Santa Clara area of California, stood in solidarity with their Muslim neighbours.

The “Hands Around the mosque” event was hosted by Muslim Community Association and the American Muslim Voice Foundation. It brought together over 40 partner organisations from various faiths and community groups. Guests were asked to stand together with their hands held, to form a protective circle around the local mosque.

Local groups who sponsored the event included the First Presbyterian Church of Palo Alto, the Diocese of San Jose, the Abrahamic Alliance, the San Jose/Silicon Valley branch of the National Association for the Advancement of Colored People (NAACP), the Japanese Peruvian Oral History Project, Code Pink, and the Peace and Justice Center.

Faith leaders were asked to wear religious clothing, and in total, the event had over 20 speakers. One of whom, the Reverand Joey Lee of the regional Presbytery made clear that: “We protest policies and executive orders that divide, dehumanize and demonize.”

Jon Pedigo, of the San Jose Diocese, wrote on Facebook: “We had over a 1,000 people join hands at 4 pm as we circled the mosque.”

Kamal Koraiten, president of the Muslim Comunity Association, told the local NBC press: “We are trying to focus less on politics and more on communal services, to be united, to be supportive of one another, to show that despite the political tension that is going on right now, we’re strong as one community coming together.”

A short 3-minute video uploaded to YouTube captured the size of the human chain. 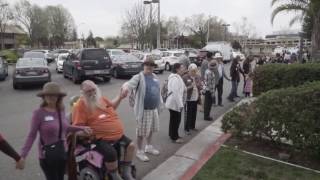 Shafath Syed, who filmed this moment, wrote that it ‘was incredible seeing so many people of all faiths around the MCA to show solidarity with the Muslim community’. Adding that it ‘reflected the real America’ and that it ‘give us all hope’.

Other photos of the event soon appeared on social media.

The event also had a musical element. Including a beautiful cover of the iconic Woody Guthrie song ‘This Land Is Your Land’ – a song further mythologised in American culture thanks to covers from musical icons like Peter Seeger and Bruce Springsteen.

Nor are such spectacles of solidarity sparse. Following the terror attack in Quebec City last month, hundreds of Canadians formed a human chain around the Ummah Masjid in Halifax, Nova Scotia. Similar events occurred around mosques in Ottawa and Edmonton last month.

Other noted examples extend as far as Chicago, Toronto, and London. In 2015, a human chain around a mosque in Olso, Norway mirrored the ‘peace ring’ formed around an Oslo synagogue following the Copenhagen terror attacks.