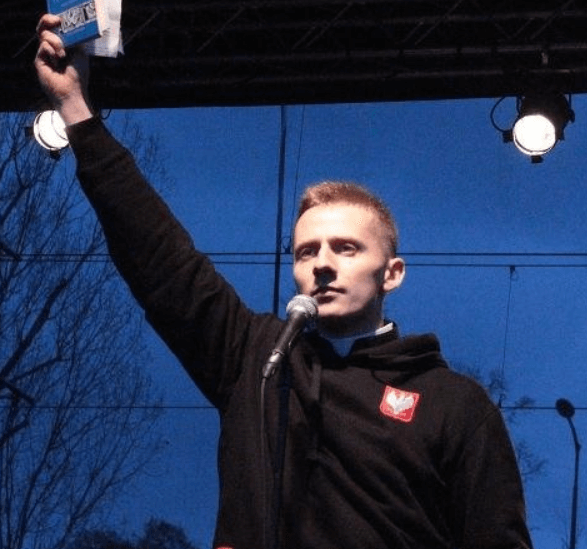 We reported on the recent far-right demonstration in Warsaw, which was organised by the National Radical Camp which has its roots in Nazi ideology and which openly promotes antisemitism, anti-migrant and anti-Muslim hatred. Over 60,000 people attended the rally, some duped into thinking that it was a celebration of Polish nationalism, whilst others realised that it was an opportunity to promote open hatred and intolerance towards Jewish and Muslim communities in Poland which are virtually non-existent.

We also recently highlighted the detention and deportation of former priest Jacek Miedlar who is active in Wroclaw and who has previously connected with and developed links with Jayda Fransen of Britain First. Miedlar was detained in February of this year as he arrived in the UK and sent back to Poland after an invitation by Britain First to march with them through the town of Telford.

Fransen, it seems, is happy to share a platform and call as a friend, the virulent anti-Semite Miedlar, who on the 11th of October 2017, made the following statement in the Polish city of Wroclaw. Mixing antisemitism and far-right nationalism with the commemoration of Polish Independence Day, Miedlar said:

“The fact that there can be synagogues here, on our Polish soil, the fact that Jews can revel in Talmudic hate inside them, is only a result of our tolerance bordering on lack of caution. Let them know that the streets are ours! Dear football fans, dear patriots, be merciless! Be radical in your fight against evil, against falsehood, against injustice, against lawlessness, against the destruction of Polish justice system and against Talmudism. We are at a war between good and evil and no Jewish Marxist horde will take away our flag or trample on Christ’s cross.”

An excerpt of the speech can be found HERE.

Such rabid antisemitism and threats against a very tiny number of Jews in Poland, should not only shock us, it should move us into action. Over 3 million Polish Jews were murdered in the country and from a population of 3.3 million Jews in Poland prior to the outbreak of the Second World War, it is estimated that about 300,000 survived, what was to become the mechanised murder of European Jewry on a scale never seen. Furthermore, Miedlar’s fascination with Fransen has extended into long drawn out statements from her which he has posted on his sites. An example of one is highlighted below where Fransen turns onto the issue of Muslims in Britain.

“With the Islamization of Britain, we meet in almost every corner of our country. Starting from the colonisation of our cities and our towns, and ending with the epidemic gangs who are ruthlessly raping and torturing our children. Islam is used as both a shield and a sword. What does it mean?  Shield to defend against Muslims accused in the case of child molestation and public unrest, which is translated as “cultural misunderstanding.” Islam is also used as a sword in implementating (sic) the culture and traditions such as the presence of Sharia Law and to use churches for Muslim prayer.”

Fransen was seen at the same event a few days ago with Miedlar on the stage and with affectionate grins towards each other before she starts to speak from the paper on which she has scrawled her speech. True to form, she picks on the strong sense of Polish nationalism that far-right activists like Fransen use to blur the lines between pride in national history and culture and outright hatred towards other groups in society. She said:

“Polish nationalism is like no other country I have visited………Whilst most of Europe has fallen to political correctness and Islam, Poland has remained a strong, traditional, Christian nation.”

“And as we celebrate Remembrance weekend back in Britain, we will pay tribute to the brave Polish Spitfire pilots who fought courageously to defend our skies during the battle of Britain.”

Shame nobody forgot to remind her that if the Polish pilots were alive today, their form of national pride would be far from the hatred and intolerance demonstrated by Fransen and her anti-Semitic and anti-Muslim friend, Miedlar. Of that, we can be sure.