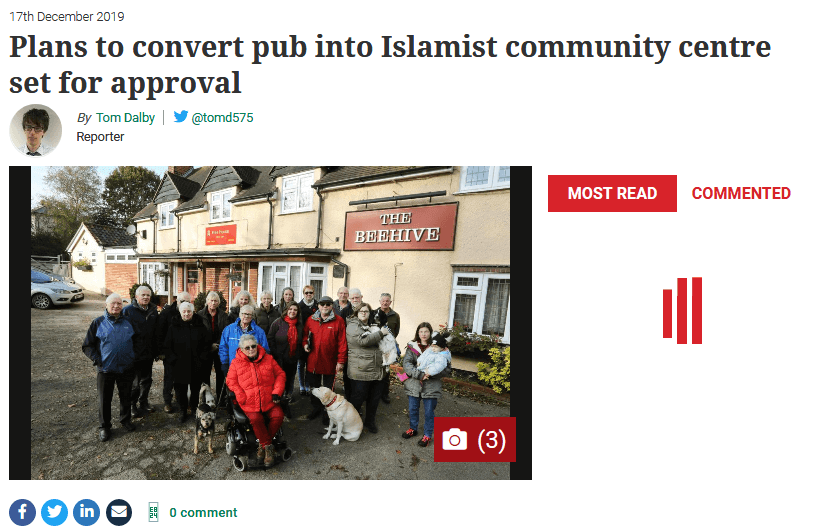 The Colchester Daily Gazette has apologised for its “grave error” after wrongly referring to a proposed Islamic community as “Islamist”.

The headline appeared in an article published on December 17, 2019, which in its print edition had read, “Islamist centre’s pub conversion set for approval”, with a near-identical headline of “Plans to convert pub into Islamist community centre set for approval” appearing online. 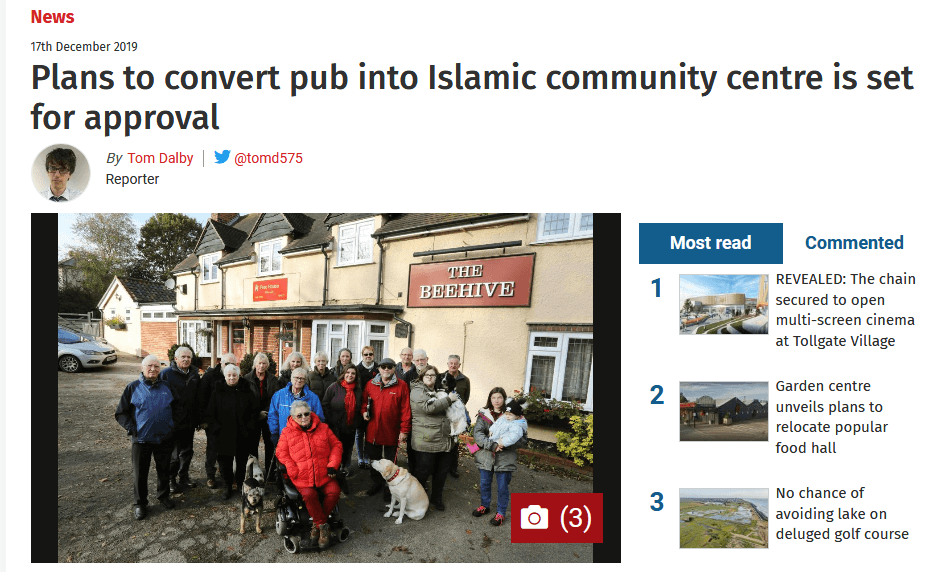 The corrected headline as it appeared in later online editions. Credit: Colchester Gazette.

Shoomi Chowdhury raised a complaint with the Independent Press Standards Organisation (IPSO), on grounds of accuracy and discrimination. Concerning the former, she argued that the term “Islamist” was understood to refer to violent extremists, and it was, therefore, inaccurate to describe the community centre in this way.

She added a complaint of Clause 12 (Discrimination), fearing that such a headline could incite anti-Muslim hatred, racism, and Islamophobia towards Muslims.

The newspaper accepted all fault, suggesting that it was human error on behalf of the journalist, who felt remorse for their mistake. Staff then spoke with the content editor and journalist, ensuring that such mistakes will not occur in the future.

A correction appeared in the print edition of the newspaper before the complaint reached IPSO, which read: “In yesterday’s Gazette we printed an article about Colchester Islamic Community Centre’s bid to convert the former Beehive pub. In the headline, the word “Islamist” was used – a term that refers to militancy and fundamentalism.

We apologise for this grave error; the headline should have read “Islamic centre’s pub conversion bid set for approval”. We have received many complaints from different communities.”

The clarification added that the Colchester Islamic Community Centre “is a community and family-centred organisation whose work has always looked at the betterment of Colchester and looking to positively contribute to the community.”

Due to a satisfactory mediation, IPSO did not mediate further.

A Tell MAMA investigation, however, has found, that due to the audited nature of this local newspaper network, owned by Newsquest, the “Islamist” headline appeared in several other online editions: including the Maldon Standard, Brentwood Live, the Halstead Gazette, the Daily Gazette, the Braintree & Witham Times, and the Harwich & Manningtree Standard. 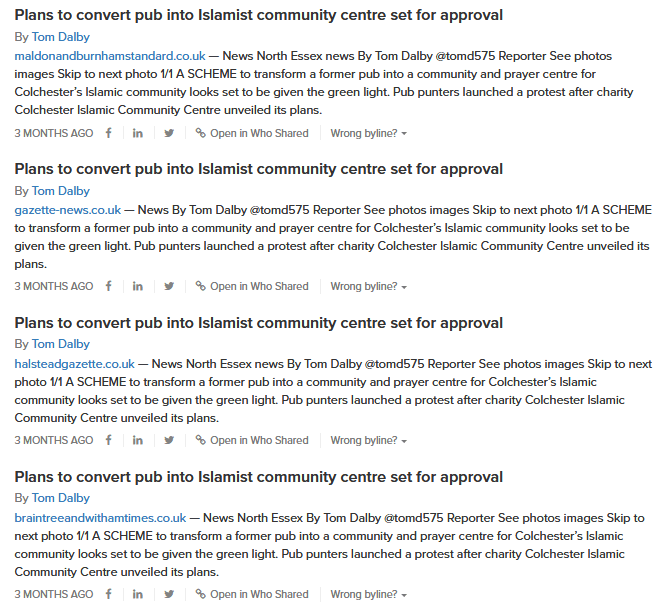 Some of the URL permalinks had contained the text “crunch-time-islamist-centre-pub-conversion” before correction, and, as further online searches reveal, the original headline still appears under this search query, which re-directs to the corrected headlines if clicked. The originals are still available through cached results.

Nor do any of the online editions carry the same correction and clarification.

Recent polling of Muslims in Britain found a lack of trust in the media when compared to other public institutions.

Guidance for journalists covering issues about Islam and Muslims published last year by the Scottish parliament’s cross-party group (CPG) on tackling Islamophobia, aims to change this. Professor Peter Hopkins, who co-authored the report, said: “We know from research that problematic media representations play a key role in fostering Islamophobia so we hope that this guidance will help to improve the portrayal, accuracy, representation and terminology used about Islam and Muslims, for the benefit of all.”

This theme is something that Tell MAMA has long explored in its annual reports and challenged.

It is, however, surprising that the online editions do not carry such clarifications, and we urge that this corrected.

Workplace diversity is a crucial tool in ensuring that such mistakes do not happen, and we have long championed more Muslim representation at all levels of journalism, including in editorial positions.