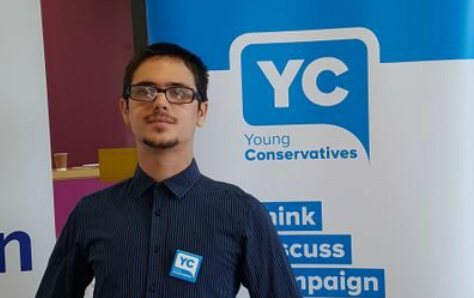 The Admin Executive for the Blackpool North and Cleveleys branch of the Young Conservatives praised the far-right extremist Tommy Robinson on Twitter, a Tell MAMA investigation has uncovered.

Jay Daniel, who tweets under the username @Jay_Daniel19, wrote on June 22, 2017, “Say what you like about @TRobinsonNewEra It doesn’t stop him from being right.”

Other tweets from @Jay_Daniel19 to Mr Robinson appear several times in 2017, with the final tweet, a positive reaction GIF from the 2013 film The Wolf of Wall Street, sent on March 19, 2018 – 9 days before Twitter banned Robinson from its platform.

A notable tweet to Robinson contained a quote, removed from its original context, from the 1899 edition of Winston Churchill’s The River War, on June 28, 2017.

Others have chronicled Churchill’s views on Islam and other races. His wartime cabinet, in 1940, also set aside £100,000 to build London Central Mosque, as a thank you to the Muslims who fought alongside the British.

On August 17, 2017, he tweeted a YouTube video from the far-right media outlet Rebel Media, which featured Robinson discussing acid attacks. 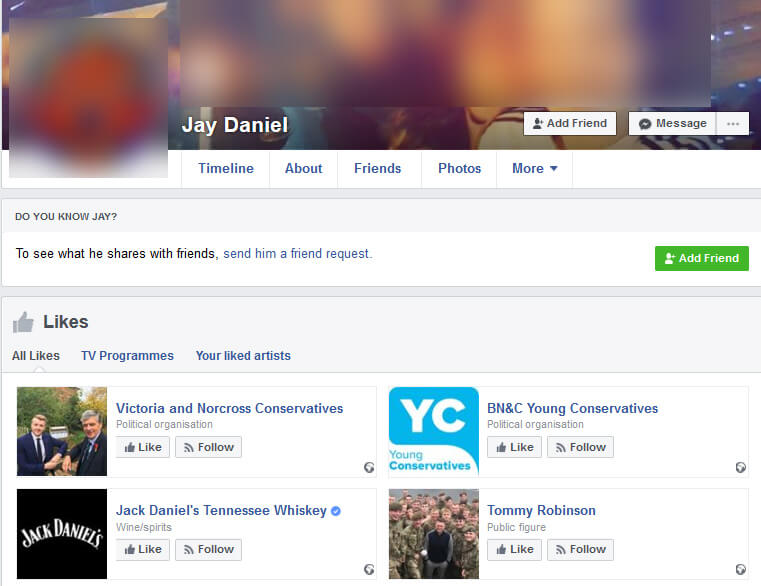 Tell MAMA has uncovered other concerning tweets of an Islamophobic and anti-Muslim nature. Including the claim that “one would struggle to come to the conclusion that Islam doesn’t instruct its followers to commit violence.” Yesterday evening, during a wider discussion, he told a Muslim woman, “Preaching hate is dangerous and your religion relishes in it.”

Tell MAMA was also made aware of tweets sent from Mr Daniel’s account which concern the racial epithet ‘P*ki’. 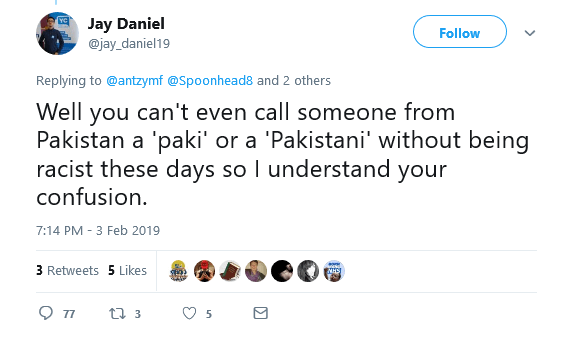 During an online discussion yesterday evening, he tweeted, “Well you can’t even call someone from Pakistan a ‘paki’ or a ‘Pakistani’ without being racist these days so I understand your confusion.” When challenged by other users, Mr Daniel added: “As you can see from my picture, I’m not the palest of blokes… occasionally people call me a Mexican or a paki or a nigga… still life moves on.” 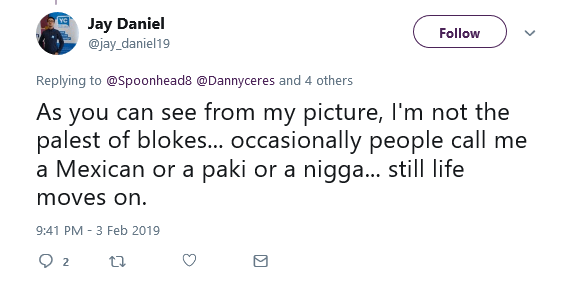 The racialisation of Muslims and Islam means that traditional racial epithets, like ‘P*ki’, are directed at Muslims, irrespective of their ethnicity.

As of writing, Mr Daniel has not responded to Tell MAMA’s request for comment and has since removed his Twitter and Facebook accounts from public view.

Questions remain, however, as to the use of the official Blackpool North and Cleveleys Young Conservatives Twitter account to defend Mr Daniel.

A statement from the Blackpool North and Cleveleys Conservatives confirmed that the individual would be expelled from the Conservative Party, adding that local MP Paul Maynard condemns racism in all its forms and that the investigation will be dealth with in a serious manner.

Please see our statement regarding the offensive comments made overnight. pic.twitter.com/kYWiIFPGyF

UPDATE: Brandon Lewis, Conservative Party Chairman, has confirmed that Mr Daniel is no longer a member of the party

I unequivocally condemn this tweet. The person responsible for the tweet is now no longer a member of the party.