Mrs Ambrosine Shitrit – ‘I am not anti-Muslim…….’ 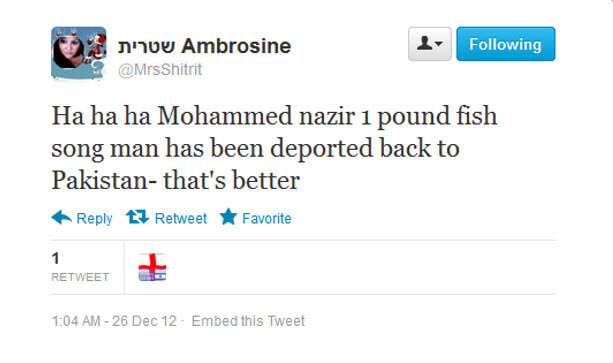 Well, we have decided to post just a handful of the kind of tweets that were sent to us by members of the public who found her statements anti-Muslim in nature. Here are some of the tweets:

So all Muslims, as to this tweet of the 1st of August 2012 makes clear, are the enemies of Jews. Slightly paranoid or someone who thinks that all Muslims are the same? You see, it could easily be understood from the tweet that Mrs Ambrosine Shitrit thinks that all Muslims are against Israelis. Is this not prejudicial thinking? She states, “1.4 million Jews, thats (sic) a minority. So who are the oppressed? 9 million Israelis against 1.2 billion or more enemies. Simple maths”.

Here is some more tweet activity from Mrs Ambrosine Shitrit, with the tweet below being retweeted by Mrs Ambrosine Shitrit in 2012. The tweet says, “The Hadith tells us that muhamed’s penis was so long, it would leave his tent n go from tent to tent of his many wives! – How sanitary!” Nothing within any further text put out by Mrs Shitrit contextualised the retweet. In other words she did not follow up by saying that she disagreed with the tweet and was highlighting it for example. It was simply retweeted, one can assume, since she agreed with it.

Whatever the rights and wrongs of positions in the Middle East, Mrs Shitrit thinks that the deceased activist, Rachel Corrie who died in the West Bank, was a Nazi.The next tweet shows her liking for a Pamela Geller You Tube video with Geert Wilders.

And yet more evidence of retweets which could be regarded as deeply prejudicial were promoted by Mrs Ambrosine Shitrit. For example, Mrs Shitrit retweets the following about the Israeli Arab population within Israel. “If Israel is ethnically cleansing the place of Arabs, they are doing a pretty crappy job of it – I thought that Jews were clever.”

We could go on for some time on these matters but here is a Facebook posting by Mrs Ambrosine Shitrit – Prejudicial? Well you make your own mind up. So, in earnest, Mrs Shitrit – does what you say stand up? We think not! And then here is Mrs Ambrosine Shitrit, (below), chatting away with a far right EDL (English Defence League) activist and sympathiser. The question is this? Who would ask an EDL sympathiser, (who openly admits to being one), to send on details and get in touch? 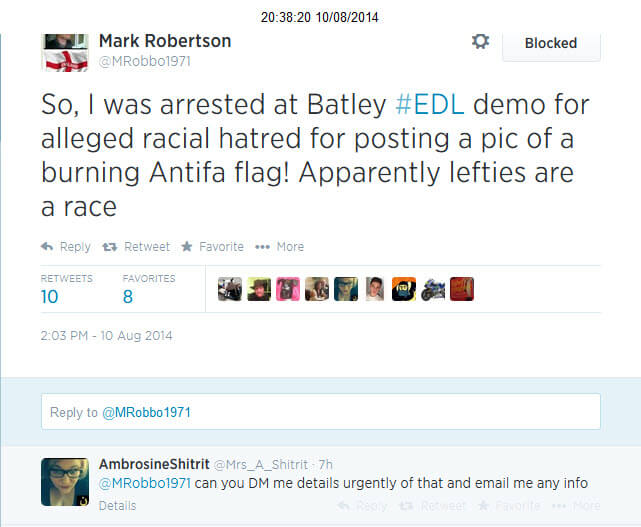 Some Other Postings By Ambrosine Shitrit who also posts as @AntisemitismEye 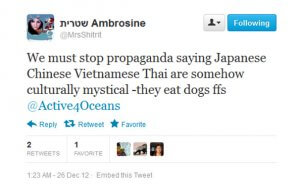 Ambrosine also seems to be think that “discrediting is the name of the game….” 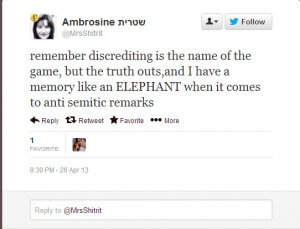 And below – her take on Palestinians. 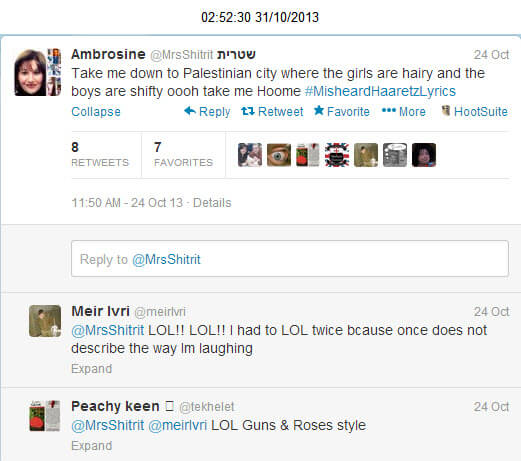