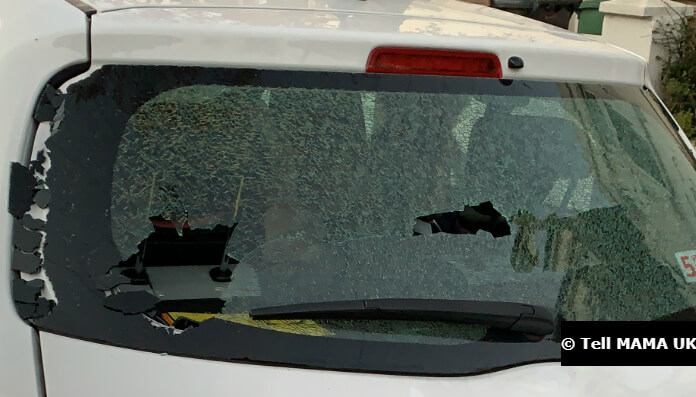 A moped driver followed a Muslim family after they had collected their young children from an Islamic school in East London before violently attacking their rear windscreen with a weapon, causing structural damage.

The shocking incident took place on December 2 at around 4 pm GMT.

Speaking to Tell MAMA, the mother, who wishes to remain anonymous, described the moment the man drove was making indistinguishable hand gestures towards her before performing a U-turn to follow them.

She noted the driver gave her hostile looks as he got nearer to their vehicle. He then produced a weapon and began attacking their rear windscreen, two of her children, under the age of eight, were seated in the back.

Her children screamed and cried during the attack, but no injuries occurred, despite the frenzied and violent nature of the vandalism.

The family felt targeted due to their Islamic faith and ethnicity as the mother and one of the children wears the hijab.

The Metropolitan Police are investigating the case, and Tell MAMA are liaising further on the matter.

In the 2018 reporting cycle, Tell MAMA verified 43 reports of anti-Muslim and Islamophobically-motivated vandalism.